MobiPicker
Culture Anime Fairy Tail Chapter 525, 526 Release Date, Spoilers: Mavis Tells The Rest...
Share on Facebook
Tweet on Twitter
Deal Alert: 49% Off on ExpressVPN
Touted as #1 VPN in the world, ExpressVPN is now offering 49% off & an additional 3-months of service on its annual plans.

Fairy Tail chapter 524 was released a few days ago, meaning that fans are now eagerly waiting for the next chapter to arrive. The last few chapters of Fairy Tail have been really interesting as they were filled with surprises. Fans got to see the return of Acnologia, who joined the battlefield. However, as the Black Dragon who caused so much trouble in the past has returned, fans are currently wondering what he is up to this time, and who will manage to defeat him. The previous chapter continued with the story of the final arc of the manga. In it, Gildarts and August were still seen fighting each other. On the other hand, Natsu was also trying his best to take Zeref down. And now, in the next chapter, Zeref will do something which will surprise almost every fan.

The last chapter of Fairy Tail focused on the fight between August and Gildarts and it will even continue in the next chapter. August currently has the upper against Gildarts as he seems to be stronger than him. Gildarts is kind of struggling in the fight as his attacks are not working at all. After seeing that her father is not doing well in battle and to save him from the humiliation, Cana rushes in and uses Fairy Glitter against August. But her attack had no affect on August at all. August then asked Gildarts what his emotions would be if his daughter was to be killed, which made the S-Class mage from Fairy Tail angry. 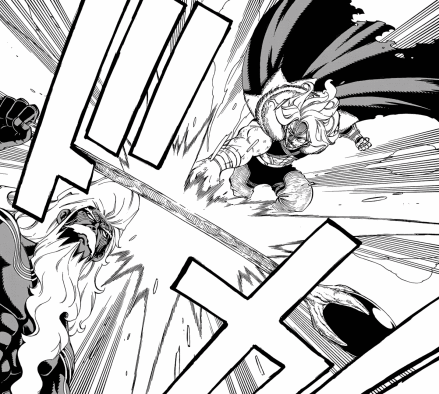 August Questions The Non-Existing Parental Love Between Zeref And Larcade

Now in the next chapter, Gildarts will charge towards August in anger. However, Cana will help his father calm down. Gildarts will advise Cana to stay at a safe distance and will warn August that he will make him pay if he even touches her. Seeing the love bond between Cana and Gildarts, August will be troubled. He will start wondering why there isn’t any parental love between Zeref and Larcade.

On the other hand, Natsu and Zeref will continue their battle in the next chapter. It is said that despite the fact that he is injured and exhausted, Larcade will rush towards Natsu and put a spell on him, which will make the Dragon Slayer sleep. He will then tell his father to kill Natsu while he is passed out. However, Zeref won’t be happy with what Larcade did, and he will then attack his very own son in anger. Along with this, Mavis will tell the rest of the Fairy Tail members to regroup as the fate of Natsu is on the line.