Fairy Tail chapter 520 was released a few days ago, and fans are now patiently waiting for the next chapter to arrive. The previous chapter was a rather emotional one as fans witnessed the death of Erza’s mother, Irene. And now, many fans are believing that Acnologia is going to return in the next chapter of Fairy Tail.

So without any further due, here is a short recap of Fairy Tail chapter 520, along with what is expected to happen in the next one.

Fairy Tail chapter 520 focused on the death of an important character. While she was on her way to end the life of her daughter, Irene started to see flashbacks of the moments she spent with Erza when she was a little kid. Because of this, her emotions returned and she realized that she can not kill her own daughter. As a result, to end her suffering, she stabbed herself and fell on the ground. Wendy then rushed towards Erza and told her that she can no longer feel Makarov’s presence. 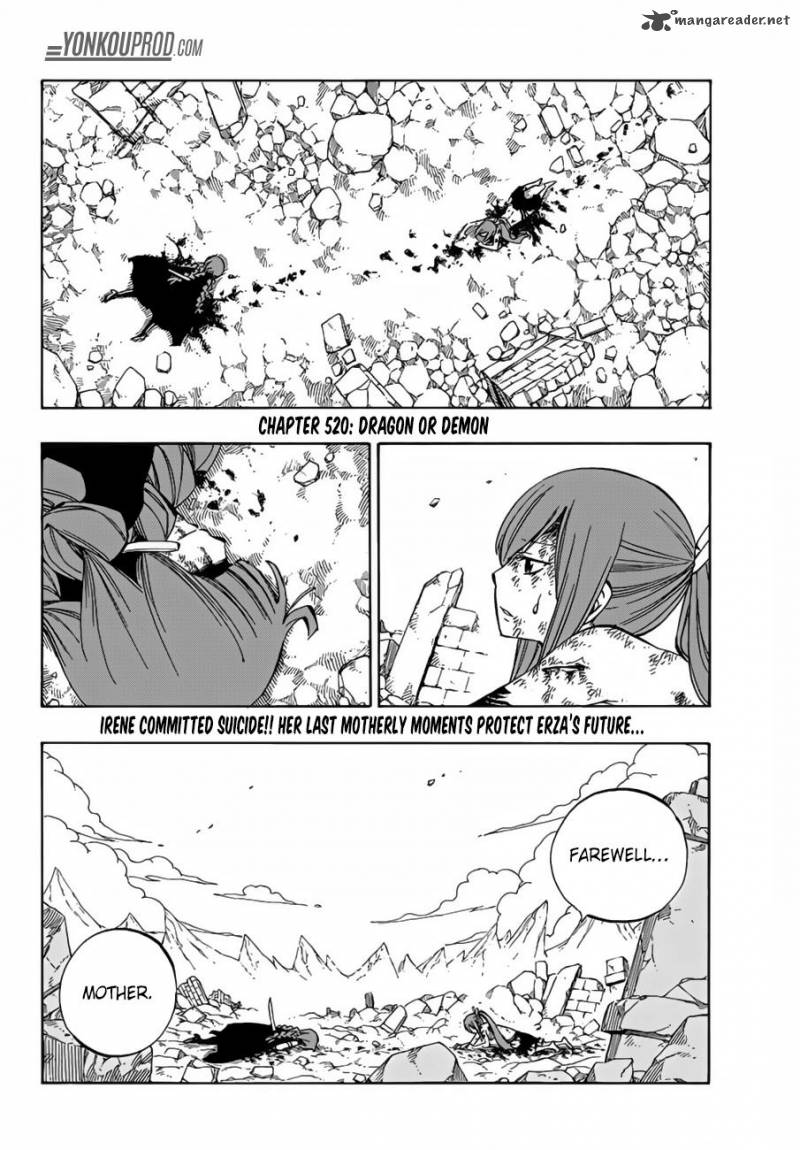 On the other hand, Natsu was in a difficult situation as he was given the option to choose either the Dragon Seed or the Demon Seed. He also had a few minutes to decide as the Demon Seed was slowly taking over the Dragon Seed, which would’ve killed him. However, Natsu didn’t think at all and he stated that he would remain as a human, after which he woke up. He then realized that Universe One returned to its normal state, as the ground started shaking after Irene’s death.

Now, it is said that Acnologia will return in Fairy Tail chapter 521. As it is titled as “The Strongest Wizard,” many fans are currently wondering who could it be. As Acnologia is currently described as the strongest one, fans are believing that it could be him. If this turns out to be true, then fans will once again see the main villain of the series, Acnologia. The chances of him to make an appearance are high considering the fact that Irene is dead. As she was the one who trapped Acnologia in the middle of nowhere, the Dragon might have escaped now that she is gone. All fans can do now is wait and see what the creator has in mind of them.

Fairy Tail chapter 521 will be released sometime in the next week. Let us know if you’re excited about it or not in the comments below.