MobiPicker
Culture Anime Fairy Tail Chapter 519 Release Date And Spoilers: Will Erza Manage To...
Share on Facebook
Tweet on Twitter
Deal Alert: 49% Off on ExpressVPN
Touted as #1 VPN in the world, ExpressVPN is now offering 49% off & an additional 3-months of service on its annual plans.

Fairy Tail chapter 518 was released a few days ago, meaning that fans are now eagerly waiting for the next chapter to arrive. The previous chapter was a rather interesting one, as we got to see Irene’s true Dragon form. Irene also summoned a meteor to end everything once and for all, but Erza is currently determined to stop the meteor from hitting the ground.

So without any further due, here is a short recap of Fairy Tail chapter 518, along with what is expected to happen in chapter 519.

In Fairy Tail chapter 518, Irene ran out of patience and decided to finally transform into her Dragon form. Not only she got bigger in size, but her powers also amplified, which put Erza in a difficult stage. The S-Class mage from the Fairy Tail guild was hopeless against the Dragon, and with only one hit from the monster, her bones shattered.

Irene Reveals Her True Powers As A Dragon

Afterwards, Irene reveals that in her currently Sage Dragon form, she can even enhance her magical enchantments. After yelling at Erza to die, Irene summons Deus Sema, a huge asteroid which comes crashing down to the Battlefield. For those who don’t know, the Deus Sema is more powerful than Jellal’s Sema. Erza quickly realizes that if the asteroid hits the ground, everyone fighting, including her friends, will die. Despite the fact that she is heavily injured, Erza moves her right arm and gets up. She requips a glove that points her directly towards the asteroid. Irene, however, laughs after seeing Erza and tells her how stupid she is as no human can destroy the asteroid. 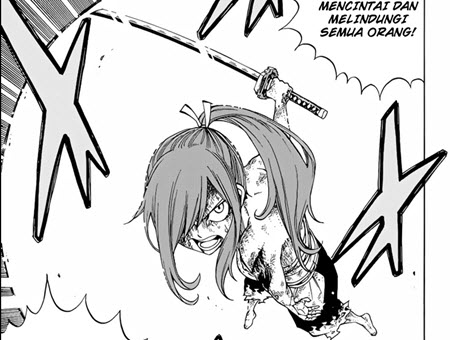 However, Erza states that being called the Queen of the Fairies means almost everything to her. After requiping once again to a sword, Erza screams that a Queen’s job is to protect everyone she loves, even if she dies in the process. Afterwards, Erza looks at the asteroid and prepares to destroy it by using her remaining power. The chapter ends with Erza screaming to her master, Makarov, to give her the strength she needs to destroy the meteor.

Now, based on what happened in the previous chapter, fans are now wondering whether Erza will manage to destroy the meteor alone or not. Currently, rumor is that someone else will soon come to her aid, and will help Erza in destroying the meteor.

Fairy Tail chapter 519 will be released on February 1, 2017. Let us know if you’re excited about it or not in the comments below.