Fairy Tail Chapter 503 was released this week, meaning that fans are now eagerly waiting for the next chapter in the critically acclaimed manga series to arrive. While they wait for it to arrive, many rumors and speculations regarding what will happen in the next chapter have surfaced, thus giving an increase to its hype.

Without any further due, here’s a short recap of Fairy Tail Chapter 503 and spoilers of Chapter 504.

Boys were sure in for a treat in the last chapter as they manged to see a naked Lucy.

In the previous chapter, Lucy was tied up to a chair (in a lewd position) in Dimaria’s lair. Natsu on the other hand, was also tied up to a chair right next to her. Dimaria then tortures the two Fairy Tail members as she currently holds them responsible for the death of her comrade, Brandish. However, she is well aware of the fact that she was the one who attacked Brandish, but she doesn’t want to accept the truth. Brandish on the other hand, is alive and well.

After some time, it is revealed that Dimaria has the ability to teleport and by using that ability, she calmly strips off Lucy’s bikini top. Dimaria tells Lucy that she currently desires to rip her eyes out, to which Lucy replies by saying that she doesn’t care if she goes blind as the smiles of her friends are present in her heart. So she bravely responds to what Dimaria says.

In the next scene, we saw Lucy lying down on the ground with blood on her face. This without any doubt, stopped our hearts for a moment as we thought Dimaria actually ripped her eyes out. However, Lucy then wakes up, with her eyes opened of course. She then got surprised after she saw Dimaria, lying next to her in a bad shape. She was mumbling ‘monster’ and was asking where Natsu is.

Shortly after this, Porlyusica along with Evergreen and Brandish appeared on the scene and claimed that they are currently searching for Natsu. Porlyusica then tells Lucy that the thing which has caused Natsu to go berserk is a sinister, demonic power. Lucy then stands up and says that she will do whatever she can to find Natsu, after which she gets teased for being naked by Brandish and Evergreen.

On the other hand, Happy is currently the one who knows that this is E.N.D and maybe he will finally reveal it in Chapter 504.

E.N.D Natsu Meets Up With Gray

Natsu, consumed by E.N.D, is seen searching aimlessly for Zeref. However, while on his way to find Zeref, he encounters Gray. Surprisingly, Natsu still remembers who Gray is, meaning that he isn’t currently fully consumed by E.N.D. One thing to note here is that as Natsu activated E.N.D after seeing Lucy getting tortured by the hands of Dimaria, she might be the one who can stop it. 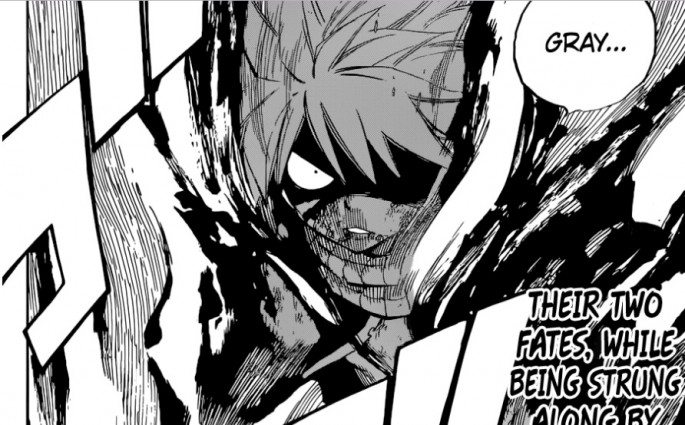 Zeref To Mess Up Natsu and Gray’s Mind

Now, rumors claim that Zeref will find Natsu before he can get to him and will mess up Natsu and Gray’s mind. However, we all know that it is currently to soon for Gray to go against E.N.D, so someone else might interfere in the moment. We can also expect to see a drama about friendship between the two Fairy Tail members. There’s a big chance that Lucy and Juvia might catch up with the two and deactivate E.N.D.

Fairy Tail Chapter 504 will be released some time in next week. The chapter will reveal what will happen when E.N.D comes head to head with Gray. Will Gray and Natsu fight each other because of Zeref or will someone interfere in the moment and save the day? All will be revealed on the next chapter of Fairy Tail.

Let us know if you’re excited for Fairy Tail Chapter 504 or not in the comments below.