Machine Learning and Artificial Intelligence are advancing at a rapid pace. Many technologies that were part of science fiction movies once upon a time are now a reality. From super-intelligent efficient robots to smartphones that are increasingly becoming smarter – the digital world is headed for an exciting future. Advancements in neural networks, deep learning and machine learning algorithms may soon bring us to a point where we will take a step back and question – “Has Artificial Intelligence far exceeded human intelligence?”. Researchers have always feared that one day AI will become so powerful that it will begin to dominate human race and pose a threat to mankind.

Elon Musk, the founder of SpaceX and Tesla, has already warned that human race is at risk of being treated like house pets if AI adoption becomes commonplace across the world. Known for solving problems by thinking about out-of-the-box solutions, the role model for many a budding entrepreneurs has now launched a company called Neuralink Corp. The solution to AI domination, Musk believes, is in developing a neural lace and the founding of the Neuralink Corp is a step in that direction. 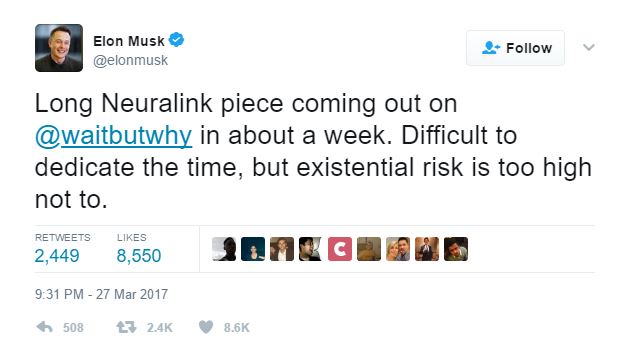 Musk had announced in August 2016 that he is working on neural lace design, a technology to augment human intelligence and avoid the AI domination. Neural lace, in its most basic form, is a computer interface system woven into the brain. The system, apart from other functionalities, will be capable of wirelessly transmitting signals to external devices. While computers communicate at the rate of trillion bits per second, human beings only communicate at the rate of about 10 bits per second. A high-speed link in the form of neural laces will be the key to bridge the gap between our brains and machines.

According to reports, Musk is actively involved in the formation of the new company and is likely to hold a significant leadership role. Max Hodak, co-founder of Neuralink Corp, has confirmed the existence of the new company.