What we really want to see in The Elder Scrolls 6 are the abilities to be evil and good with magic. Just imagine an argonian with pitch black scales and eyes walking up with hooded robes on and then he uses a hex that turns his enemy into a skeleton. Or a paladin with a more varied choice of anti-undead and Daedra spells. Also, we think something like the domino spell from dishonored 2 would be great for illusion spell using assassins.

There are credible rumors going on about insane customization and character creation in the next Elder Scrolls game. We honestly think that the problem with Skyrim’s spell system was the fact that you required lots and lots of gold to get spells, making a battlemage being able to use weapons a lot more often than spells. We believe that the mage guild should have quests to unlock spells and you should be able to get spells as you level.

We also believe certain spells that could allow you to gain a lot of Magicka, like the ability to steal life from a friendly in exchange for Magicka or a spell blocking shield that allowed for you to absorb some Magicka. In Skyrim right now, it is almost required that you play either a Breton or high elf for the ability to gain a lot of Magicka very quickly. If they added more ways to get spells and magical it would allow for more flexible builds.

One of the main problems with the game is that they give far too much importance to potions and poisons. Potions and poisons should be there to give you that extra health, Magicka or stamina, to increase your strength, giving you that extra bit of damage against enemies that are a bit too tough, and so on. The way it works, however, it doesn’t matter if you’re a thief, warrior or mage, potions are vital to any build, poisons are equally important, and that’s crap. Anyways, let us know your suggestions for The Elder Scrolls 6. 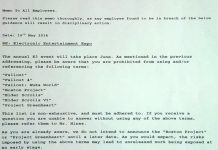