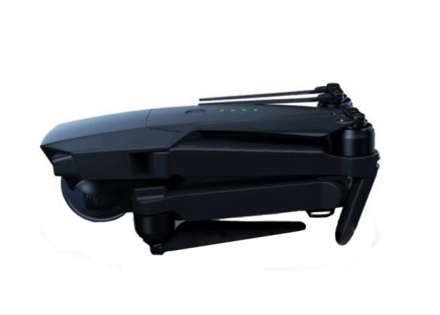 Up until now, we only had a few leaked images of this much-anticipated drone, but they didn’t really reveal anything other than showing it’s compact, seemingly lightweight, and foldable body.

We knew it was possibly coming with Android, an LCD display, a 3,830 mAh battery, and Wi-Fi connectivity (up to a distance of 300-meter). There were also rumors about it carrying a 4k camera and a two-axis gimbal. The teaser video doesn’t confirm nor deny any of those rumors, but it confirms that the DJI Mavic is coming on September 27. The company has already sent out invites for the event.

Dubbed “Reshape Your World – September 27, 2016”, the video is full of subtle hints, as well as visuals of the drone itself (alongside some really amazing-looking footage).

The video hints that DJI Mavic will have a whole bunch of ultrasonic sensors on it, giving it obstacle avoidance ability.

From the video, it also appears as if the drone has a number of ducts which, in turn, suggests that it comes with an aerodynamic body – something that we don’t usually get to see on drones built for slow filming.

Of course, our assessment could be wrong – but I guess there’s no way to know that for sure before the September 27 launch event, unless of course, more leaks happen in between. Stay tuned for more updates.