Diep.io (also known as Tank.io on mobile devices) is all the rage and the latest in the line of popular games based online on domains with the .io suffix. While the original Agar.io was about expanding circles and Slither.io was essentially Snake turned into a massively multiplayer online game, Diep.io takes the same formula of setting you on a giant field populated by others like you, but gives you the controls to a tank instead. Can you survive Diep.io, or will you… well, die? 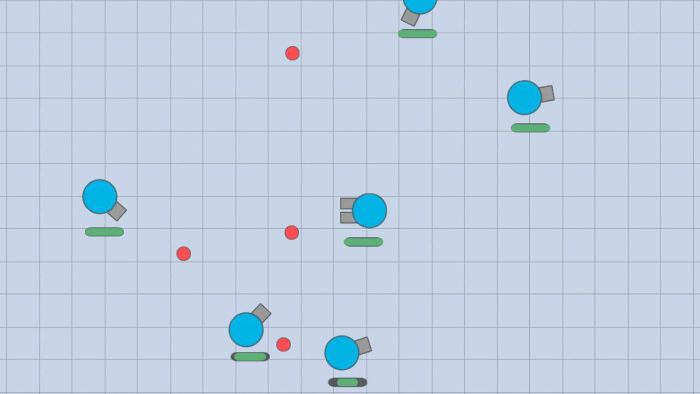 How it Works: For starters, you control a tank, and you move using your keyboard while clicking with your left mouse button to shoot. Across the playing field, there’s geometric objects floating about that you must shoot to gain experience from. Yellow squares offer the least experience, followed by red trianges, while blue pentagons offer the most. As you gain experience, you can level up and improve your abilities, in true RPG style, from a list of skills. The skills are: Health regen, Max health, Body damage, Bullet speed, Bullet penetration, Bullet damage, Reload and Movement speed. They all really do what they say on the tin.

Tips and Tricks: There’s no one strategy that works in Diep.io, because the game is inherently open-ended and allows for a wide variety of tactics. One idea is to up your movement speed and health regeneration, followed by body damage and movement speed, to the point that you can just run over blocks to earn experience instead of actually shooting them.

Keep in mind that you can upgrade to new classes at levels 15, 30 and 45. These can often give you massive advantages, based on your playstyles. Be sure to try them all, so you’ll know which ones gel with the way you play Diep.io. Due to the nature of the game, every player will find a different class they identify with, so there are likely as many strategies for this game as there are skilled players. If you have any tips and tricks in the game, be sure to let us know!

Manager Class: The Manager class was added in the latest update for Diep.io, and it’s an interesting one. According to the developer, the Manager is a cross between the Overseer and Stalker classes. To get it, upgrade via the Sniper path and get to Overseer. When you hit level 45, the Manager upgrade will become available to you. The Manager class has the ability to zoom and the ability to launch triangles when it attacks. It can even go invisible!

Hybrid Destroyer Class: The Hybrid class was added under the Destroyer category. According to YouTuber Fl?mes, it is a hybrid of Overseer and Destroyer. To quote them, ‘Basically a Destroyer with extra triangle bullets/missiles or “Doritos” that cannot be controlled, but attack nearby squares, triangles, pentagons, and players.’ To get it, pick the Machine Gun class at level 15, then the Destroyer class when it becomes available to you at level 30, and then upgrade to Hybrid at level 45.

Have you tried the Hybrid and Manager classes? Let us know what you think about them in the comments below.