Deus Ex Mankind Divided System Rift Trailer was recently revealed. The game has only been out for a few weeks. But if you’re ready for DLC, it’s coming sooner than expected. This first story DLC is called System Rift. It features Security Chief Frank Pritchard. He was last seen in Human Revolution. Pritchard and Adam Jensen will team up to take on the Palisade Blades.

The Palisade is one of the most secure data banks in the Deus Ex world. Along the game, Adam will learn more about the Illuminati. You’ll get some more Deus Ex action such as hacking, combat, stealth or whatever path you choose.

System Rift is now available on PS4, Xbox One and PC. It’ll cost you $12 or nothing at all if you have the Season Pass. Mankind Divided’s second story DLC, A Criminal Path, will release in early 2017. But we don’t know much about that expansion yet. Keep up from all the latest Deus Ex and the Illuminati by tuning into MobiPicker. 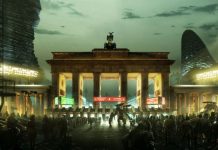