MobiPicker
Games Console Gaming Destiny: Where is Xur? April 15 – 17, Location and Items Guide
Share on Facebook
Tweet on Twitter
Deal Alert: 49% Off on ExpressVPN
Touted as #1 VPN in the world, ExpressVPN is now offering 49% off & an additional 3-months of service on its annual plans.

It’s Friday, which means Xur is back, peddling this wares for you Destiny players out there. If you’ve got the Strange Coins for it, Xur might have something particularly interesting for you this time around. This will be his first appearance since the April update, and you’ll find him hanging about in Reef. Here’s a look at what he’s got on him. 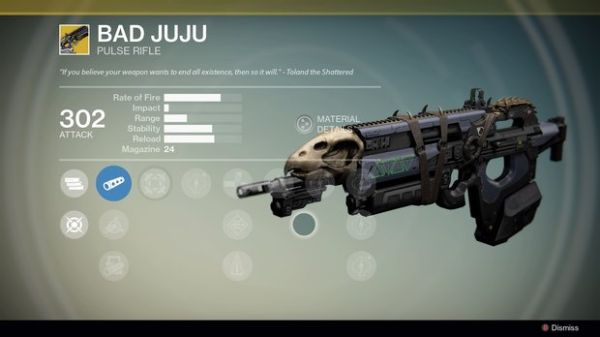 Out of this fairly meaty selection, the Bad Juju (pictured above) is a particularly neat rifle. It even has a skull on it, so you know it means business. The Bad Juju auto-reloads after every kill it makes, and furthermore, it will increase your damage after that kill. It’s basically an unstoppable machine of death. What? No, I’m not being paid by Xur to promote it. Yes, you should buy it.

Xur will be hanging about until 2 am Pacific Time and 5 am Eastern Time, which is 10 am for those of you in the UK and 6 pm in Japan. What will you be getting from Xur this time around in Destiny? Let us know in the comments below.