Destiny 2 is an upcoming first-person shooter titled developed by Bungie and published by Activision. The game is currently scheduled to arrive after a few months and fans are all hyped up for it. Although the game will differ from its prequel, Destiny, in a lot of ways, but there is something both games will have in common, and that is Exotic weapons. In the prequel, Exotic Weapons have been the top choice of players. Exotic weapons basically are unique in almost every way, but it is really difficult to get them.

In Destiny, there were tons of Exotic weapons and fans absolutely enjoyed playing with them. These weapons basically change the whole play-style as all of them have their own perks. Just like its prequel, Destiny 2 is also going to feature various Exotic weapons, and here are some which have been confirmed so far. Thanks (PCGamesN)

Before we get into which Exotic weapons have been confirmed for Destiny 2 so far, there is something you should know. In the game, the Exotic weapons will have only a single row of perks. The first one is going to be intrinsic, while the rest of them will be locked. If it works like the previous game, then players will have to unlock these perks by gaining experience points. In addition to this, each Exotic weapon which has been seen so far has only two unique perks. 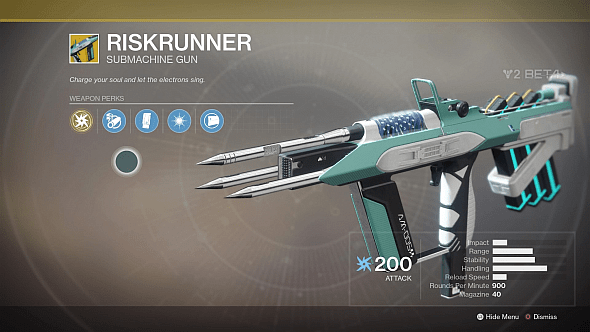 The Riskrunner is a new type as it is an Exotic Submachine gun. The weapon basically deals with Arc damage as it is an energy weapon, and features a clip size of 40-rounds. As for its perk, its intrinsic perk is Arc Conductor, which will increase the overall power of the weapon when the Arc damage is received. It has another perk, Superconductor, which will work something like “when Arc Conductor is active, shots fired have the chance to become chain lightning and return ammo.” In short, this is the kind of weapon which will be helpful in battles when you will receive a lot of Arc attacks. 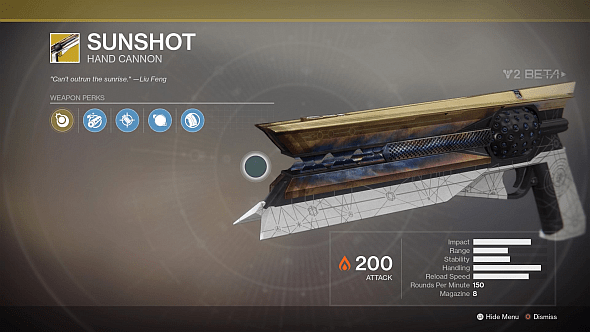 The Sunshot is an Exotic Hand Cannon. The features a clip size of 8-rounds with a fire rate of 150 rounds per minute. As for its perk, its intrinsic perk is Sunburn, through which it will fire explosive bullets. Its second perk is Sun Blast. This is kind of amazing perk as it will cause enemies to explode with solar energy. This is the kind of weapon you will need when you’re in the mood to just destroy your enemies. Like literally destroy them. 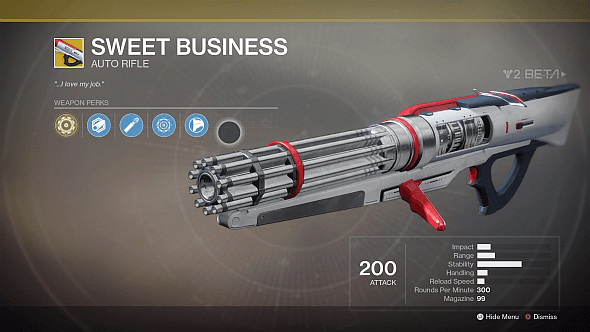 The Sweet Business an Exotic Auto Rifle. However, judging from its look and its clip size, it should be considered as a minigun. It features a clip size of 90-rounds with a fire rate of 300 rounds per minute. As for its perk, its intrinsic perk is Payday, through which the clip size of the weapon is increased along with its accuracy. Its second unique perk is Business Time, which basically increases the damage and rate of fire as the trigger is pressed, and it also loads ammo into the magazine. The most amazing thing about this weapon is that it has no heat up issues. This is the kind of weapon you will need when you just need to create havoc.

Let us know if you’re excited for Destiny 2 or not in the comments below.