MobiPicker
Mobiles Android Deal: OUKITEL K6000 Plus Available For $173.99 With $50 Worth Gift Bag
Share on Facebook
Tweet on Twitter
Deal Alert: 49% Off on ExpressVPN
Touted as #1 VPN in the world, ExpressVPN is now offering 49% off & an additional 3-months of service on its annual plans.

OUKITEL had released their K6000 plus smartphone last month and from last week, delivery for the all the pre-orders is being handled. Now OUKITEL is continuing to give extra bonus with one of their authorized store Hao Han YingGuang Store. Specifically, when you order K6000 Plus at $179.99, the price will drop $6 down to $173.99 automatically when you pay for your order, and you will get a gift bag worth $50.

OUKITEL K6000 Plus boasts of 6080mAh large battery which supports long-lasting daily use. It comes with 12V/2A flash charger which can charge the 6080mAh battery in just 100minutes. The K6000 Plus sports a 5.5-inch FHD display with 1920×1080 resolution. It is powered by MediaTek MT66750T processor and comes with 4GB RAM and 64GB internal memory. It also gets a 16MP rear camera and an 8MP front facing camera. Both are real pixels, no interpolation. The fingerprint scanner is located on the front; it’s not only for fingerprint recognition – it also works as the home button.

As part of the deal, you will not only get the $6 discount off from the retail price of $179.99, but also get a gift bag which includes a smart leather case, a tempered glass, a protective film, a silicone case, and an OTG cable. K6000 plus also drew attention during the Global Sources Mobile Electronics Exhibition in HongKong. You can get the K6000 Plus at $173.99 here. 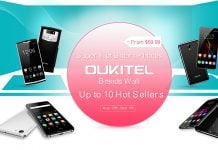 OUKITEL Begins Flash Sale for its Top 10 Phones on GearBest 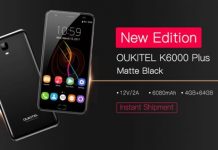 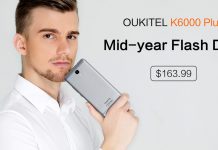 OUKITEL K6000 Plus Mid-Year Flash Offer Is Now Going On 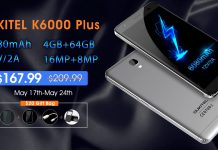 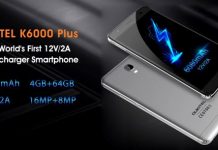