MobiPicker
News Mobiles DataWind PocketSurfer GZ Comes with 1-Year Free Internet; Priced at Just INR...
Share on Facebook
Tweet on Twitter
Deal Alert: 49% Off on ExpressVPN
Touted as #1 VPN in the world, ExpressVPN is now offering 49% off & an additional 3-months of service on its annual plans.

DataWind, the leader in low-cost internet connectivity, has launched the PocketSurfer GZ in India for INR 1499. The Smartphone comes with 1 Year Free Internet usage offer. DataWind has partnered with Reliance Communication to offer free internet. The phone will therefore come bundled with Reliance Communication’s service offerings, allowing you free internet access for one whole year.

The phone comes with touch screen and features a rear camera with flash. DataWind has not shared the complete specifications of the phone. Speaking about the latest smartphone, Suneet Singh Tulli, CEO of DataWind said –

“We are focused on driving the cost downward to a level where access to technology becomes universally affordable and democratization of technology finds its true meaning. Therefore, this new launch of smartphone at just Rs 1499 is a step in that direction. This will certainly enhance the connectivity in the developing nations.”

Popular for its Aakash Tablet and UbiSurfer notebooks, DataWind has been known for making affordable low-cost devices. The company also manufactures low-cost tablets. DataWind aims at breaking the affordability barrier and provide connectivity to the 4 billion people who remain unconnected to the internet. As a leader in low-cost internet connectivity, DataWind launches products that come bundled with inexpensive one-year prepaid internet browsing service plan.

“Hands-free communication has become extremely important and we feel strongly that this technology should reach every corner of the world. DataWind aims to break the affordability barriers and bandwidth constraints of networks touching the mass of India at a whole new level. While need of internet reflects in every household, our product will enable everyone in the country to afford a smart phone.”

One year free internet subscription sure does seem attractive. It remains to be seen how successful DataWind will be in capturing the low-end smartphone segment with the launch of PocketSufer GZ. 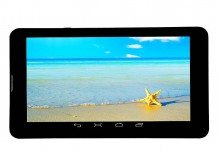