Dark souls 1 is by far everyone’s favorite of the series. When gamers discovered it in 2012, they were just in awe at the PVE and eventually the PVP. We had so much fun with it, Dark Souls 3 just pales in comparison in our opinion. So yes, we’d play the crap out of a remaster if it ever were to happen. The only thing that would need a change is the backstab. Replace it with Dark Souls 3’s backstabs and we think it would be a hit. Miyazaki already said FromSoftware isn’t going to remaster the game. But he’s not opposed to another dev team remake. However, we feel like it would end up being PS exclusive anyways.

There’s a certain magic to the Dark Souls 1. Like the forest is the typical fantasy black forest with weird, whacky characters. And is sharply contrasted with the sadness of the Great Wolf Sif. Anor Londo is the sprawling city that was abandoned by its citizens leaving behind its tall spires. And the mindless servants of Lord Gwyn, a fallen god-king. In dark souls 3, every location is a ruin filled with zombies. You faced hollows for like 20% of Dark Souls 1 and were always greeted with a new unique, story-filled location.

We were also incredibly intrigued by the strange NPCs. It was the only game where we’d be interested in listening to their full dialogue. But in DS3, most players just skip all that stuff simply because not a single NPC was interesting in the slightest, except for Seigward. He’s alright but even then his story is bland as hell. 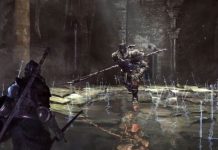 Dark Souls 3 PC: How to Fix The First Bonfire Crash