Black Friday is just around the corner, less than 3 weeks away. As with every year, you can expect awesome deals and discounts to be offered all over the US, with tons of tech products to be offered at excellent prices. Costco will be part of Black Friday deals, and some of them will be pretty nice, according to the part of their leaked deals flier. 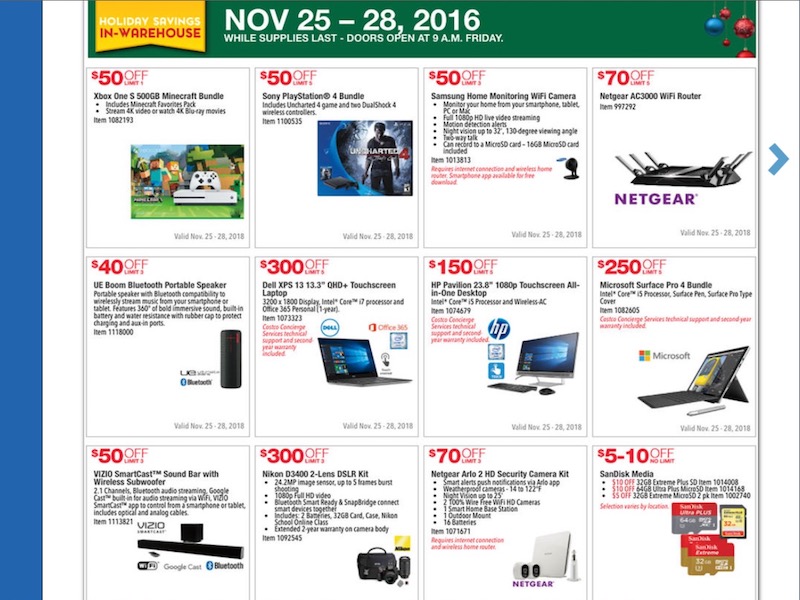 The leak shows a couple of interesting deals that will be offered to customers starting November 25. As you can see on the picture, two console bundles, both PS4 and Xbox One S, will be on sale. The PS4 bundle contains Uncharted 4 game as well as two DualShock controllers and will be offered at $50 off. The second bundle contains an Xbox One S as well as Minecraft Favorites pack, and it too will be offered at $50 off. Console discounts are the most popular purchases during Black Friday and we are sure this will be the case this Black Friday. It looks like the PS4 bundle will be more popular at Costco since it includes an additional controller as well as one of the best games of 2016.

Further, we found two nice deals on Dell XPS 13 and Microsoft Surface Pro 4. Dell XPS 13 (QHD resolution + Core i7) will be discounted by $300, while the Surface Pro 4 bundle including the Surface Pro 4, one year of Office 365,  as well as Surface Pen and Pro Type Cover is offered at $250 off. HP Pavilion All-in-One desktop PC (23.8-inch 1080p screen, Core i5) will be on $150 discount, another sweet deal. The prices from which the discounts will be taken off aren’t shown, meaning that final pricings, after the discount, aren’t revealed. Costco’s Back Friday sale will start on November 25 at 9am and will last until November 28.

Bear in mind that Costco is a membership-only retailer, you have to sign up for membership if you want to purchase in Costco’s brick and mortar shops, or online.