Fallout is a great game, from the first one, released way back in 1998, up to the last entry of the franchise, Fallout 4. It seems the game’s so realistic, especially with its depiction of hacking, that CNN ended up using a screenshot from Fallout 4’s hacking mini-game to explain how Russian hackers did their thing. 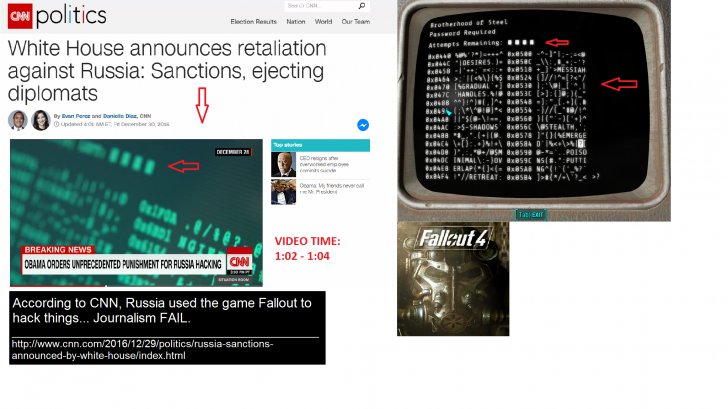 You couldn't script a show about CNN's incompetence…they are too stupid for believable fiction. https://t.co/llmPy5t0TM

The image first surfaced on Reddit posted by a user going by the name of Poofylicious. The user explained that “CNN uses Fallout hacking footage to show how Russians hack.” The story was about actions taken by the US Government against Russia regarding the alleged hacking of the DNC emails.

Reddit users started a rant, mostly laughing at CNN for using a picture from a video game in a serious news report. The fail quickly went viral with lots of Tweets making fun of it. Even Bethesda posted a Tweet mocking the CNN.

This isn’t the first time CNN has been lambasted for reporting on “fake news” and it seems mainstream media will do just about anything just to show how recent US presidential elections were misconducted.