Clash Royale’s official Facebook Timeline has been updated with a sneak peek, presumably regarding a new update. The Sneak Peek, which is numbered “#1”, indicating it is the first in a series, hints that we’ll soon have Live Spectating in the game, something Supercell has already talked about in the past. An interesting detail we’ve learned from this sneak peek is that you can also throw confetti while live spectating. Sounds like a great way to have spectators engage with the players. Apart from this, the update will also introduce TV Royale Channels, allowing viewers to watch the best battles from any Arena they wish. 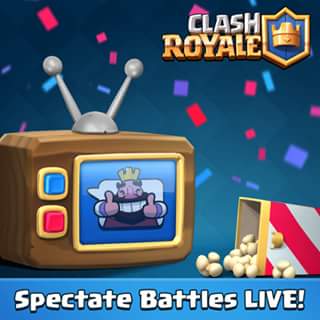 Many changes are in store for Clash Royale in the month of march. Apart from the introduction of live spectating and TV Royale Channels, there will also be double rewards for crown chests, and donations will triple, allowing players to request 30 common cards instead of 10. Supercell is also focused on improving “consistency at the top“, which means bringing the game in line with Tournament Rules. Level caps for various cards have been changed, and Legendary cards will appear in the Shop.

What do you think of the upcoming changes and additions in the May 2016 update? Let us know in the comments below.