A latest Clash Royale leak suggests that the Dark Witch Card might be coming to the game soon in the Insane Draft challenge. Reportedly the card is going to be available in an event named as the Insane Draft Challenge. The card will allow the players to follow a path that leads to unlocking the elusive Dark Witch. 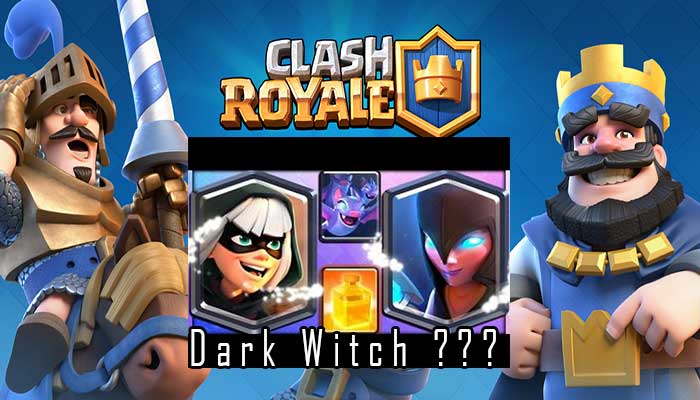 The news came from a Redditor named as TheNicestAF who posted his findings on the Clash Royale  Subreddit. According to TheNicestAF, The Dark Witch is probably the same as the Night Witch who previously appeared in a similar round of cards along with Bandit earlier in March 2017.

The Dark Witch is actually a melee witch who instead of the skeletons, spawns the bats. The witch is a legendary character accessible at Arena 8. As her very aggressive move, the witch spawns the bats and the bats then stick to the enemies. The bats stick for a very long time and that annoys the enemies to a great extent. The spawn of bats is the witch’s greatest ever advantage over the enemies.

This simply means that it’s strategically more beneficial for the players in terms of following the High-elixir troops in the drafts. However, it is not precisely known that how many moves the players will need to earn them. Following are the possible rewards that the players can earn by completing the Insane Draft Challenge.

There is no official date revealed for the Dark Witch challenge, so take all the above information as a possible rumor. While the source of the news is somehow credible and has a good experience of mining the Supercell’s code for a number of prior leaks as this one, there is no official statement from the developer yet.

Hopefully, the experience of TheNicestAF’s claims will turn out t o be true. If it does come true, it’ll be a great addition to the game. Players will definitely enjoy obtaining the Dark Witch Card. And they’ll be able to enhance the gaming experience a little bit more.

What’s your say on this news about your favorite mobile game Clash Royale? Will the Dark Witch be the next new Card from Supercell for the game? What are your thoughts about the Insane Draft Challenge? Let us know all about it via the comments below.