Supercell organised the first official Clash Royale live tournament over in Helsinki, Finland and managed to attracts over 200 top players of the card game as they competed for a combined $15,000 prize pool. It seems that the game’s best players are apparently from Supercell’s home ground: Finland. 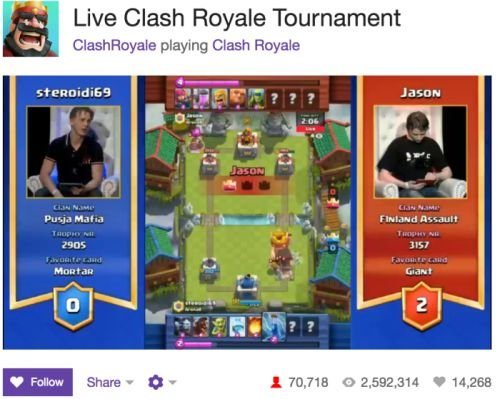 According to Pocket Gamer, the top prize was won by a player named Jason, pictured right above, who beat out Steroidi69. All four semi-final spots in the game were dominated by Finnish players. Legend has it that Clash Royale has been a centuries-old pastime to tide over the harsh Finnish winters. That’s my theory, anyway.

The event was live streamed on Twitch and YouTube, drawing in millions of viewers, with over 65,000 concurrent viewers on Twitch and 50,000 on YouTube. This is certainly a very strong sign that Clash Royale is destined to become a very relevant eSports force of its own.

Supercell will be further capitalising on this by introducing live streaming of clan games in the upcoming update for Clash Royale. This is a welcome change from the current state of affairs, where players can only see replays of matches. Live streaming should go a long way in building an eSports culture for the game.

What do you think of the first official tournament for Clash Royale? Let us know in the comments below.