Supercell has already confirmed that a massive update is going to arrive this month for Clash of Clans. The upcoming update will be unlike any other update Supercell has ever released in the history of the epic strategy game. Supercell has revealed, in its blog post, about the massive update and has also mentioned specifically what the update will NOT be about. No Townhall 12. No level 13 walls. There will be no new hero levels. It’s unique from any update and it’s huge. But there will be a boat that needs repairing. Given that Supercell has made it clear that there will be no sneak peeks for the upcoming update, many theories and speculations are doing rounds on the internet.

Well, there are many fans out there who just wish to get a sneak peek about the upcoming update. But given that there won’t be any official sneak peak, fans have to settle for “theories” that are doing rounds on the internet. Supercell has already updated the game to reflect the boat on the shores of villages. When clicked, the boat brings up info, which redirects to a video that gives a ‘hint’ about what role the boat is likely to play. 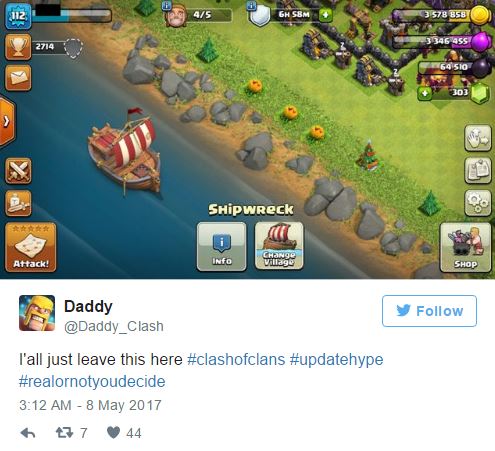 An image posted on twitter shows how the fixed shipwreck could look like. Some have claimed that the image is genuine, since it comes directly from Supercell while others think it’s a fake, since the colors don’t add up. Will the shipwreck take users to unexplored horizons? Will it lead to the second village? And if so, what has night mode got to do with it? 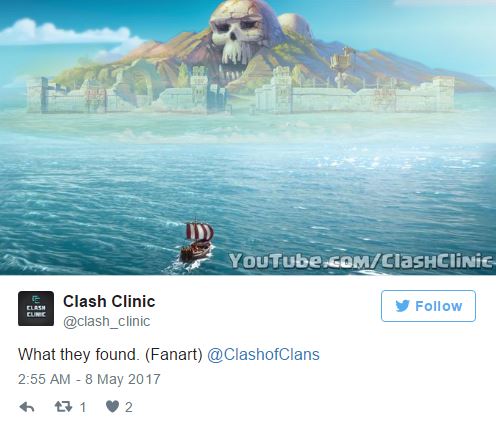 Some die-hard Clashers are predicting that the second village will only be available for night attacks. Another user posted a totally weird image on Twitter, depicted what users can expect to see on the “other” side of the village. Well, the pic does look promising and exciting, but we’ll never know for sure until the update actually arrives.

The latest update on Supercell blog post has officially confirmed that the update will arrive this May. The ‘update radar’ status reads – “Not before 11th of May (doesn’t mean on 12th of May)”. So it’s fair to expect the update to arrive sometime mid of May.

What do you think about the upcoming update? What are your ideas? Feel free to post in the comments section!