Clash of Clans will see the release of a new update later this month, and things are heating up quite a bit now. With two sneak peaks already out-of-the-way, (the first, the second), our third sneak peek shows us a whole new unit in action, and this one is called the Bowler. As usual, the video is hosted by a new YouTube Channel, this time the channel being Wicked Gaming. Take a look below to see what’s new. 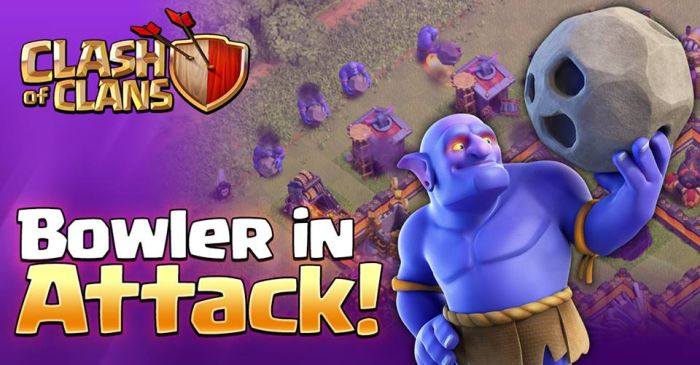 The Bowler is added at Town Hall level 10 and appears to be the new TH 10 unit we have anticipated for over a month now. That’s him in the picture above, obviously, looking like a rejected design for the genie from Aladdin. The Bowler is the first whole new troop added to the game since the inclusion of the Lava Hound, which was a long time ago.

The Bowler ‘bowls’ a massive boulder that can bounce off of structures to attack other structures for the same damage as the first hit. Wicked Gaming points out that this makes the unit especially devastating to square and donut bases. As for his stats: in the build Wicked Gaming was playing with, the Bowler features a DPS of 85 and 380 Hit points. He costs 170 Dark Elixir to train.

Have a look at the bowler in action below, and let us know what you think in the comments.