Google Chrome for Android has received a new update today and now carries version number to 51.0.2704.77 with build number 270407700. This is a stable release and not a beta build unlike several previous releases. The latest Chrome APK download weighs 43.25 MB and works on Android 4.1+ devices.

The new Chrome 51.0 APK for Android comes with performance improvements and bug fixes. Do not expect any new features from this new update though, as there will be no changes inside due to the lack of a changelog. This stable version is now available to download from the Google Play Store.

You can download Chrome 51.0 APK from APK hosting websites such as APKMirror, APK4fun, and APKPure.com. 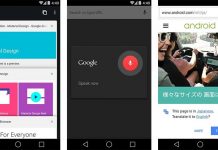