Cherry Mobile has launched a new smartphone under Google’s Android One concept, dubbed Cherry Mobile One G1. The phone has unveiled in an Ad published in Philippine Daily Inquirer ahead of its official announcement. The phone is priced at Php 5,999. 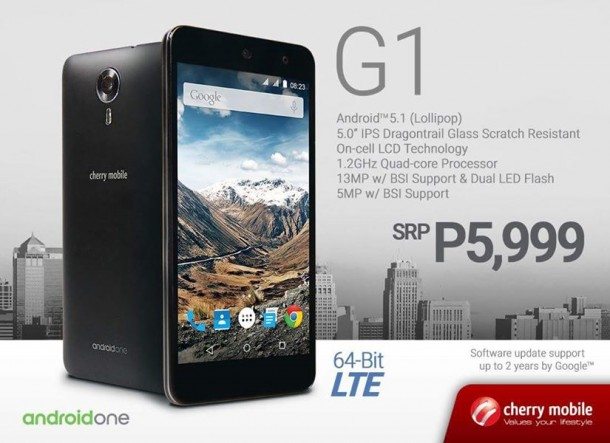 Running stock Android 5.1 Lollipop out of box, the Cherry Mobile One G1 comes with a 5-inch display with a resolution of 1280 x 720 pixels and Dragontrail Glass scratch resistant protection. It packs 2GB of RAM, 16GB of native storage, which is expandable with a microSD card slot, and a 2,500mAh battery. The handset is powered by a 1.2GHz Quad-core 64-bit Snapdragon 410 of processor with Adreno 306 GPU.

The back of Cherry Mobile One G1 is garnished with a 13MP primary shooter with dual LED flash, and a 5MP of front camera. As far as connectivity is concerned, it includes, dual-SIM, 4G LTE, 3G HSPA+, Wi-Fi, Bluetooth, GPS and A-GPS.

For those are not aware, all the phones under Android One concept comes with a guaranteed 2 years software update from Google. So it would not be saying wrong that phone will also be getting Android M in coming months.