Recently, the web saw a release of a couple of video clips portraying a giant 4-meters tall robot controlled by a human placed in robot’s torso. The machine looks like it came out from the world Gundam or Mech Warrior. In other words, it looks like it came from the future.

Many technology sites shared videos, and Korean giant robot soon went viral. All this made Live Science conducted an investigation trying to find out if the mech was real. Here’s what they found out.

The South Korean company which allegedly is responsible for constructing the robot is unknown to robotics researchers who got contacted by Live Science. Also, all video and photos came from just one source: Facebook and Instagram pages of Vitaly Bulgarov, a designer who already made a project telling a tale about a “fictional robotics corporation that develops its products in a not-so-distant future.” Seems connected?

The site sent messages to the Korean company’s CEO, but they went unreturned. The company is called Korea Future Technology, and if you do a Google search, almost all info related to the company can be found in headlines telling about the mech, or in posts made by Bulgarov. Domain name of the company’s site, hankookmirae.com (South Korea Future, when translated from Korean) was registered on February this year to Lim Hyun Kuk, the alleged company CEO. The domain doesn’t have an active site associated with it, and Bulgarov said that “If you look at this from a Western point of view, then yeah, that might seem strange, but in that part of the world, the culture is a little different. The company wants to make something first before they advertise themselves.”

The site couldn’t contact the person associated with the domain registration, Bulgarov didn’t share the name of the engineers involved in the project, and stated that videos were meant for his circle of followers only and that the company would do a press release when the robot gets completed, during 2017. 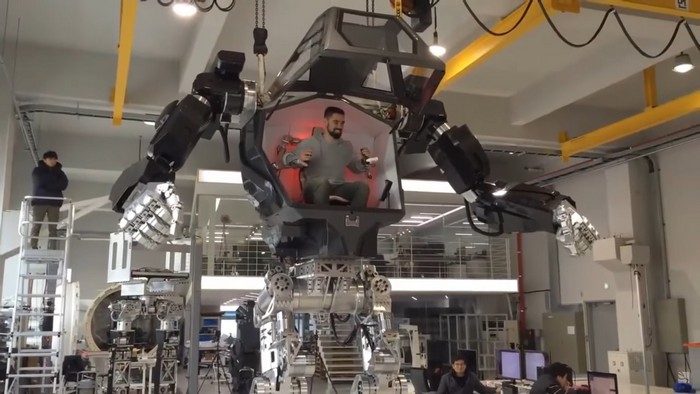 Ronald Fearing, a professor of electrical engineering and computer science at the University of California, Berkeley, was contacted by Live Science. He said that technology seems plausible, that the machine would be “nice piece of work,” and that it would take around $20 million and a couple of years in order to make it.

Furthermore, the lab in which the robot is designed is looking just too clean. Christian Hubicki, a postdoctoral robotics researcher at Georgia Tech, said that “Robots are messy business,” and that “They get torn apart and put back together over and over, and transmission grease gets all over the place. Even the nice white floor is beautifully unscuffed. Never once during likely hundreds of hours of debugging the giant robot did it kick in a way that scratched it up?”

Hubicki stated that “When I look at the bulk of the leg — say, above the ankle — it still stops its downward motion extremely quickly (I think within a frame of the video). [N]ot impossible, but if it is real, I’d be really curious about how the effects of that impact are being handled.”

Hubicki thinks that “As intriguing as the video is, at some point, you have to ask yourself, ‘Did a secret company with no obvious ties to existing humanoid robotics groups actually develop a giant humanoid robot with likely unparalleled power and torque, and instead of sending out a press release, they unveil the robot by dribbling out low-resolution videos on Instagram via an affiliate who just so happens to be a visual effects artist?”

It seems that giant robot videos are fake, but that doesn’t mean that the robot isn’t cool. It would be great if some company actually constructed a giant, bipedal robot, but as it looks like, huge mechs seen in anime and video games are still far away from becoming a reality.