The quest for a budget smartphone seems unending these days with so much to choose from. There are really a lot of options and it gets difficult to pick one out of them. And we all know one fact- the big brands do not offer top-of-the-line specs at entry-level prices. So you need to choose a phone from a lesser-known brand, which isn’t that bad altogether. Smaller brands actually make great smartphones and when the budget is the constraint, you should surely give them a try. Two such phones are the Mlais MX and OUKITEL U8. Never heard of them? Don’t worry, the specs are mind blowing. 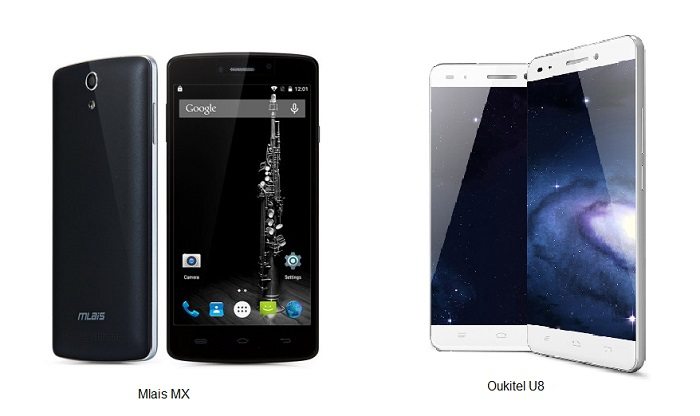 The Mlais MX gets a 5-inch HD display and looks nicely designed with a curved back. Meanwhile, the OUKITEL U8 gets a 5.5-inch HD screen made out of the 2.5D curved display and gets a premium metal body made out of aluminum, thus making it look beautiful.

OUKITEL U8 and Mlais MX both get the same 64-bit MTK6735 Quad-Core Cortex-A53 chipset under their hood along with a Mali-T720 GPU. There is a nice 2GB of RAM and 16GB of expandable memory.

Both the phones support 4G LTE along with Dual SIM dual standby, with one slot being a standard SIM slot and other being a Micro SIM slot.

Both the devices run Android 5.1 Lollipop out-of-the-box, and I don’t think any further update will be provided by the manufacturer. Though Android 5.1 is the latest and you should not have any problem running it for at least two years, after which you can change the phone.

The 5-incher Mlais MX gets a huge 4300mAh battery, while the slightly bigger OUKITEL U8 come swith a comparatively disappointing but decent 2850mAh battery.

Connectivity options in both the phones include GPS, Bluetooth, 3G, 4G, Wi-Fi, and micro USB.

Meanwhile, the OUKITEL U8 gets a fast and secure fingerprint scanner at the back just below the camera sensor, which can be a really useful feature.

The smartphones are available at Everbuying. Mlais MX can be bought for just $109.99 by using the coupon “MlaisMX”. Meanwhile, the OUKITEL U8 is priced at $113.99

Both the phones are equally great, but a few extras like a good-looking metal frame, fingerprint sensor, 2.5D drop-water display, and better camera make the OUKITEL U8 a more premium package than the Mlais MX for just a few extra bucks.