Boruto: Naruto Next Generations Episode 12 has wrapped up with Mitsuki revealing to Boruto that he knows who is behind the Ghost Incident. Episode 13 will see both of them having a heated discussion after learning the culprit.

Episode 12 was a light-hearted one where no Ghost incident occurs. Everyone is busy with their work except at the end of the episode that reveals an interesting twist. Read to know more.

At the academy, it is seen that Boruto learns about working in the team and its importance. He participates in a race that requires team coordination. He, Mitsuki and one more classmate join him in the race. But due to the lack of strength of their third partner, they fail to complete the race.

For their surprise, the teachers at the academy declare no winner. The students are asked to complete the race that has many hurdles together as a team. This is where most of the students fail. As a result despite completing the race alone, not one winner is declared. Teacher Shino is impressed with Boruto once again and talks with other teachers about the boy’s hard work.

Mitsuki has helped Boruto along with Shikadai to find out the culprit behind the Ghost incidents. But in this episode, he appears a bit suspicious. He asks almost everyone, their opinion about Boruto. He asks Inojin also who says Boruto is the crazier person. He goes to meet Class Rep in the hospital and asks her about Boruto. She does not think Boruto is crazy. Meanwhile, she also reveals to Mitsuki that she has no family just like him. They all died and she is the only one living in this life.

The way Mitsuki appears excited to gather everyone’s opinions about Boruto make him look suspicious. Does he carry any ill thoughts toward his friend Boruto?

Hinata and Himawari are very happy to see that Boruto brings his friend Mitsuki home. It has been a very long time since Boruto has brought anyone home. Both the boys go upstairs in Boruto’s room. Here Mitsuki is seen very excited to see the photographs of the Seventh Hokage, Naruto. He appreciates his valor and courage.

But Boruto is not very happy about his father. He starts revealing to his friend how his father behaves in the home. Perhaps, Boruto feels there is nothing special about Naruto.

Boruto learns at home that Naruto will be also joining them for family dinner. But as soon as they start their dinner, Naruto gets a call that gives updates on the Ghost Incident. He says that he has to leave for now. This behavior of Naruto irritates Boruto who leaves the house angrily.

Immediately Mitsuki follows him to the bridge where Boruto is standing with a sad face. Boruto starts yelling about Naruto and how he has no time for his kids. It is at this moment a flashback is seen of Mitsuki’s family. And he starts feeling that they both are sailing in the same boat. Even he wants to prove to his father that he can do those things which his father cannot do. Soon he breaks his silence and tells Boruto that he knows who is behind the Ghost incident.

What Happens In Episode 13?

The preview of the next episode reveals a major face to face battle between the Ghost and Boruto’s team. Sai is also seen in the clip. Will the Ghost finally be revealed? 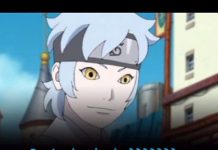