Bluboo is not a very popular name in the smartphone industry, but when it comes to high-end gadgets with low price tag, the company secures a decent rank among all the leading Chinese brands. The company is basically working on low budget smartphones, but going by the current report, it has built a new wearable, named Bluboo Xwatch, which will go on sale starting February 2016.

The company claims that the Xwatch will be the first Chinese wearable which features GPS, Barometer, and Altimeter as a standard. It is worth mentioning that it is not the first wearable from the company’s stores, as it has already released the Bluboo Uwatch earlier this year. 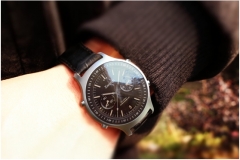 As reported by Bluboo, the Xwatch sports a 1.3-inch round retina display with 360×360 resolution, which is close to Huawei Watch in terms of sharpness. Powered by the MediaTek MT2601 chipset with 1.2GHz processor, it has 512MB of RAM along with 4GB of internal memory space. A 480mAh battery keeps the wearable running.

In terms of thickness, the Bluboo Xwatch measures 9.8mm, which is noticeably slimmer than the 11.4mm Moto 360 and 10.5mm Apple Watch.

Pricing and exact availability date are yet to be revealed. We are in contact with the company officials and will report more details as soon as we manage additional info about the Bluboo Xwatch. Stay hooked onto MobiPicker.