With the Bluboo Edge entering pre-sale tomorrow, i.e. Nov 10, 2017, Bluboo has released an official introduction video explaining what makes the new handset one of the best options consumers have in the budget and mid-range categories. 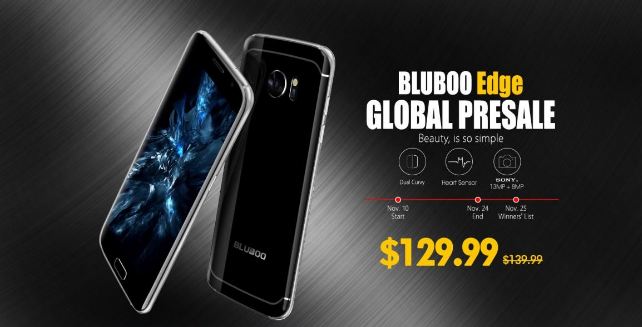 Thanks to its sleek yet sturdy curvy display similar to the one on the Samsung Galaxy S7 Edge, the Bluboo Edge has so far managed to ooze a positive vibe. But the stylish build is not the only advantage the device can brag about. It also comes with a pretty decent hardware configuration including a quad-core MT6737 processor clocked at 1.3 GHz, 2GB RAM, 16GB built-in storage (expandable up to 256MB using a microSD card).

As for the cameras, the 13MP primary camera comes equipped with custom-made Sony sensor whereas the front camera has an 8MP selfie shooter. The Bluboo Edge also has a fingerprint sensor with fast recognition technology that unlocks it within 0.1 seconds.

The presale begins on November 10 and will continue through November 24. During this period, three units of the new handsets will be offered as a free giveaway each week. The Bluboo Edge is originally priced at 139.99, but the special discounted price during the presale period is 129.00