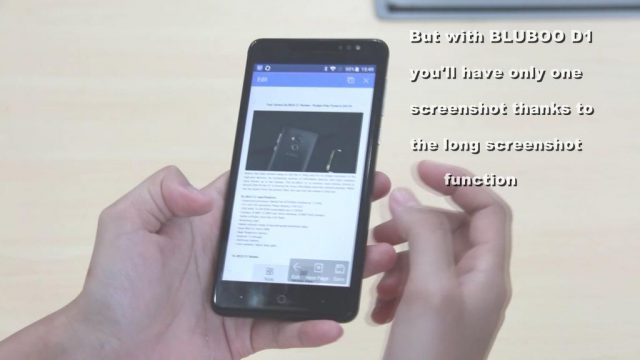 BLUBOO D1 is a budget smartphone with dual rear cameras. The company has been heavily promoting this smartphone since its launch. Apart from taking impressive photos, the BLUBOO D1 is also capable of snapping a photo of the screen quite easily.

As it can be seen in the video, a user with an iPhone snaps several screenshots of a long article. However, there is another user using the Super Screenshot feature on BLUBOO D1. After launching the Super Screenshot taking a snapshot of the screen, it can be seen that the screen automatically scrolls to next part of the long page and the user only needs to tap to take the snapshot after which the page automatically scrolls to the next part. This way a screenshot of a long page can shot quite conveniently on BLUBOO D1.

It can be also seen that a user can make use of a finger to create a box or a circle or any shape to take a snapshot of the desire design. This function is called funny mode for screenshots.