BlackBerry using Android in its smartphone instead of its own OS is a big thing, but BlackBerry apparently does not want to make a big fuss out of it. No huge media event will be held in a huge auditorium filled with industry experts and journalists, waiting for the BlackBerry Priv to be unveiled. Unlike other manufacturers who like to give their flagships a grand launch, BlackBerry has decided to not go with the flow and has opened up pre-orders for the Priv, PhoneArena reports.

When the BlackBerry Priv had started leaking out, the biggest doubt surrounding it was its price, which has been revealed and is nowhere near to being affordable. Priced at $749 USD, the BlackBerry Priv will start shipping on 16th November and will not be compatible with U.S. Cellular, Sprint, or Verizon, according to ZDNet. 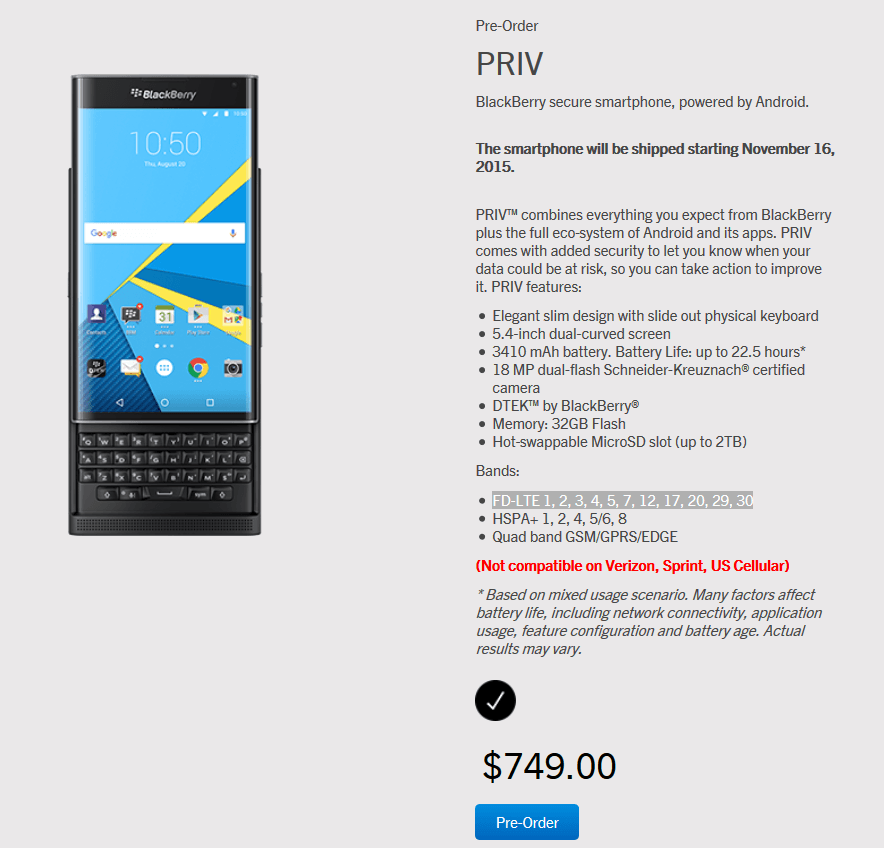 Going into the details about the phone, there’s a 5.4-inch Gorilla Glass 4 protected dual-curved display. The phone is powered by a Snapdragon 808 chip which features a hexa-core CPU alongside an Adreno 418 GPU. The Priv carries 3GB RAM and 32GB internal storage, which can be expanded up to a mind-blowing 2TB of space via the microSD slot. Sitting at the rear is an 18MP Schneider-Kreuznach camera with OIS, while there’s a rather disappointing 2MP camera at the front. A nice 3410mAh battery will keep the phone running for up to 22.5 hours on mixed usage, and the phone also comes with a quick charge tech.

So if you are a BlackBerry fan and/or the BlackBerry Priv looks irresistible to you, you can pre-order the unlocked 4G LTE phone from BlackBerry’s official online store.