From today, BlackBerry has officially opened up pre-registration for the BlackBerry Priv, perhaps to raise the hype for the upcoming slider Android smartphone. By filling out the form provided on their site, you will supposedly be the ‘first to know’ when the Priv gets a release.

We have already discussed some of the key features of the BlackBerry Priv, including its rumored price which is around $630. The BlackBerry’s shot at the Android OS is its last hope for staying in the mobile production industry and therefore should, and hopefully will be something extraordinary. 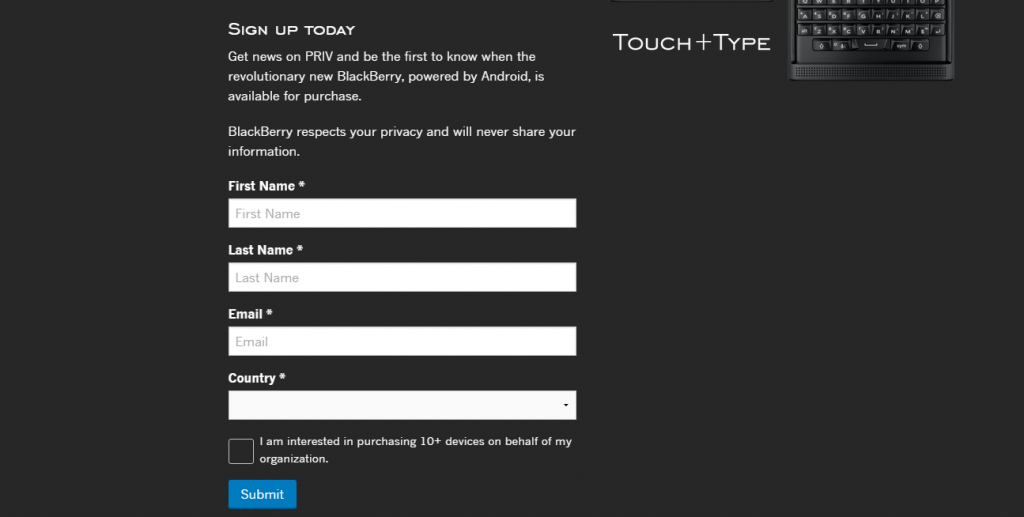 The official pre-registration site also has a checkbox at the end stating “I am interested in purchasing 10+ devices on behalf of my organization.” Sounds a bit fishy, but probably serves as a way for BlackBerry to see the potential size of audience, or might even put those ticking the box ahead of others upon release.

If you missed the previously presented specs of the BlackBerry Priv, it is an Android-run (Lollipop) smartphone with a 5.4-inch curved display built with the iconic BlackBerry QWERTY slider keyboard. Under the hood it has a Snapdragon 808 with 3GB RAM and 32GB internal storage. Adreno 418 is responsible for the graphics. Other specs include a Schneider-Kreuznach certified 18-megapixel rear camera paired with a 5-megapixel selfie unit, and a 3410 mAh battery.

If you believe in their pre-registration feature and wish to purchase the phone when it is released head over to BlackBerry’s official site and apply for it ASAP.