No matter how many times you declare BlackBerry extinct, it always rises up and continues to deliver smartphones. The Canadian smartphone company has now launched its third Android-based phone, called DTEK60.

The DTEK60 comes with a 5.5-inch display (which also happens to be BlackBerry’s largest screen to date), Snapdragon 820 chipset and 4GB RAM, with a decent 32GB storage. All these specs are pretty standard in most newly launched devices. What catches our attention is the 21MP rear camera – one of the best cameras in BlackBerry devices so far – plus the MicroSD slot that lets you expand the storage up to a whopping 2TB. 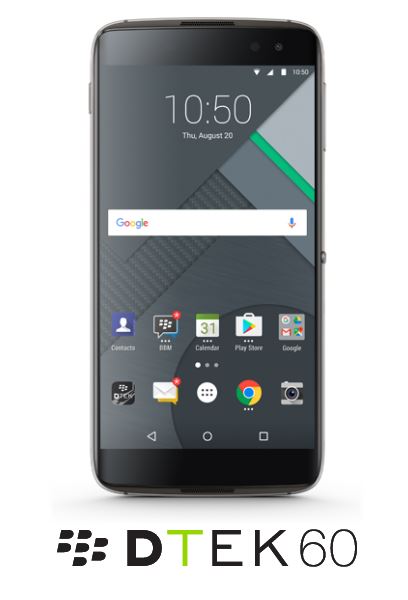 Initial glance at the device screen reveals that it isn’t as curved as Samsung’s phones but does taper on either side of the display. The tapering is more or less similar to Google Pixel display. The black bezel above the screen houses 8MP front facing camera. Just beside the camera is a “selfie flash”. There are no buttons at the bottom bezel.

The smartphone features a headphone jack on the top with a USB-C port on the bottom. The Power button is on the left side, just above SIM slot. The volume control is on the right side. The new smartphone sports a glass surface – instead of the conventional “blackberry-ish” rubbery textured backing. In that sense, the DTEK60 is very aesthetically pleasing and feels like a premium phone.

The finger reader is positioned just above the company’s logo on the back. The logo is just “B”, not the entire BlackBerry that was its trademark hardware imprint. Above the fingerprint reader is the 21MP camera. Unlike other BlackBerry devices in the past, the DTEK60 does sport a unique design, with a “premium” look and feel.

BlackBerry’s DTEK60 software offers a very simple method to help you keep track of app permissions. At the top of DTEK60, you get to see a simple meter that shows the strength of your security setup. The meter ranges from red to green, with red indicating very weak security and green indicating good security. The software also offers several other different settings and app permissions.

BlackBerry on its website claims that the “DTEK by BlackBerry for Android” app will automatically monitor your OS and apps and let you know when your privacy could be at risk and how you can take action to improve it. With just a quick glimpse you can see the overall security rating for your device—excellent, fair or poor—and what you can do to improve it. DTEK also tracks your applications and notifies you when someone is:

In all, the new DTEK60 highlights the importance BlackBerry has placed on manufacturing a secure device. The phone runs Android Marshmallow – it’s basically an Android phone that runs BlackBerry software on top.

The DTEK60 is powered by a decent 3000mAh battery. While that may seem less powerful compared to battery ratings of most of the recently launched smartphones including Pixel, it does give you about one and a half day of standard usage. The quick charge option allows you to get some instant juice.

The Road Ahead For BlackBerry

BlackBerry, facing tough competition from Apple and Samsung, said it plans to outsource the development of smartphones to focus more on its profitable software business. This means that the latest DTEK60 will probably be the last phone for which the company buys hardware itself. “This one is our phone,” BlackBerry Chief Operating Officer Marty Beard said in an interview. “This is fully our responsibility.” Comparing Apple’s iPhone 7 and Google’s Pixel, he said – “If you look at feature by feature by feature, and you’re looking at dimensions and weight and the display and the memory and the camera, the battery, it is a very strong competitor to both those devices.”

It will be interesting to see how BlackBerry positions itself in the mobile security software business as it continues its transition away from hardware.