In a recent conversation with John Chen CEO of BlackBerry with Bloomberg (Video at bottom), John didn’t comment on the rumors on BlackBerry may be using Google’s Android nor he rubbishes it away.

[quote_box_center]People asked me, will you ever build one? And I said, well, if I could make it secure, I will, which is a very honest, true statement. We’re looking at it. I can’t say that it’s conclusive at all right now.[/quote_box_center] 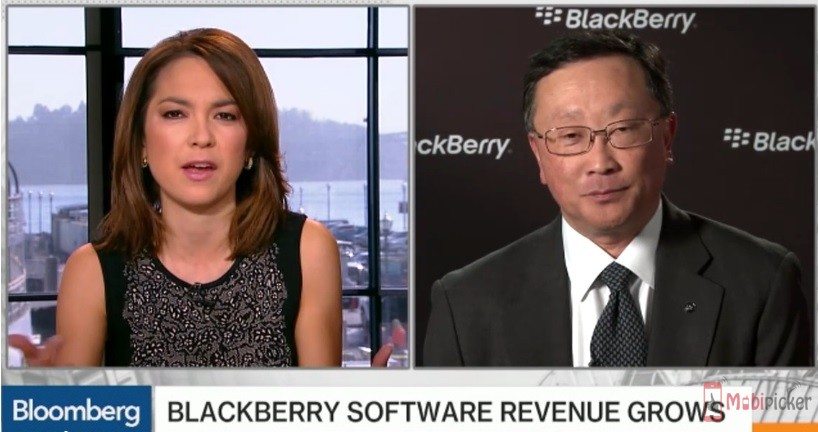 However he said that BlackBerry is pondering how to make Android more secure. Couple of weeks ago, Reuters cited the shift to using Android would be part of BlackBerry’s ongoing transition to focus on software, device management and security from unnamed sources. The security of Internet of Things is also the focal point for BlackBerry in the market.

BlackBerry may come up with an Android device with some of the patented features on BlackBerry 10 platform which is expected to showcase the BES12 (BlackBerry Enterprise Services 12) to secure the devices running on other OS.

In an interview Chen said that BlackBerry has “a good shot” at achieving its goal of $500 million in software revenue this fiscal year, which ends in March 2016. Yet he is not giving up on devices. “Well, it’s not clear to me that devices are not going to be profitable,” Chen said.

According to him BlackBerry had routed its investments towards software which were earlier demarcated for hardware. With the current agreements with Wistron and Compal Electronics, Blackberry is committed to make devices efficiently. These agreements will also improve the logistics and supply chain.

[quote_box_center]”There are multiple things one has to do. It is not one thing that’s kind of a thing. But I think that over time, with a good set of designs which we said we’re going to release at the end of the year, I think all of those will add up, and cumulatively will get our devices back on track.”[/quote_box_center]

Now having just less than 1% market share, BlackBerry is focused to scale it up very fast.

[quote_box_center]”I don’t want to debate whether it’s choppy in the device business or not. I think [when] new designs come out we will have a shot of building the business back up. The most important thing right now is to make it profitable.”[/quote_box_center]

According to Wells Fargo analysts research note, BlackBerry software revenue is just US$ 74million which is well below the estimate of Wall Street by US$10million. As the software revenues shown by the waterloo based company majorly consists of Intellectual property and licensing deals with Cisco systems and are tune of about US$ 55 million in the total bucket of US$137 million of Blackberry Software Revenue.

“Due to lower than expected rate of growth”, the company has lowered its expectation of achieving 100$ million revenue targets in this financial year. However as per the company enterprise is being focused in developed markets and consumers in developing markets to generate revenue from BBM. As per the analysts

[quote_box_center]”We believe BBRY is now in the heart of the transition. We continue to believe there is a market opportunity for BBRY (penetrating existing BlackBerry accounts and then driving client access licenses for Android/iOS devices). However, as we’ve indicated previously, we believe enterprises tend to deploy into pilots first and then small commercial deployments before rolling out on a larger scale. This could hamper revenue growth for another couple of quarters, which is challenging during a time when the company is investing into its software platform.”[/quote_box_center]

It’s too early to tell whether or not BlackBerry is going to be able to really produce an Android smartphone that is sufficiently protected as per its customary. Although few reports have pointed out that Samsung may be willing to assist. However BlackBerry is committed to its BlackBerry 10 OS, which is presumed to command the smartphone due out later this year.