Attack on Titan season 2 episode 2 was released a few days ago, meaning that fans are now eagerly waiting for the next episode to arrive. The previous two episodes of the second season have been really interesting. Fans managed to see how Sasha saved a little girl from a Titan by using only a few arrows. Along with this, the Beast Titan was also introduced and surprisingly, he was able to communicate with Mike. And now, mankind is currently fighting the Titans who breached Wall Rose. 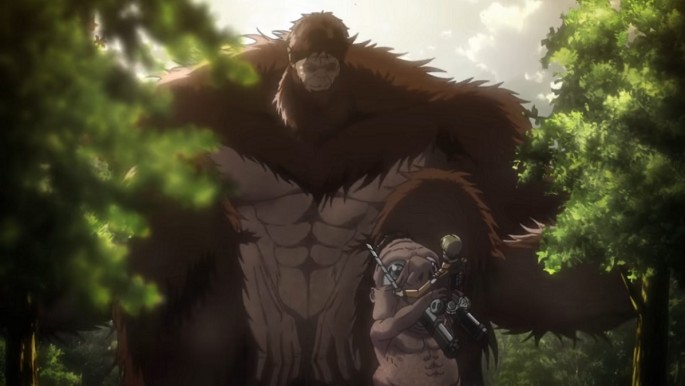 So without any further due, here’s what is expected to happen in Attack on Titan season 2 episode 3.

In the previous episode of Attack on Titan season 2, Sasha used an arrow to blind a Titan so she and the little girl she was trying to save can escape. However, it was only a small victory as the main horde of Titans is currently making its way to the inner parts of the walls. But the Survey Corps are trying their best to keep them at bay.

Recently, a preview clip of Attack on Titan season 2 episode 3 was released. The clip has a length of around 53 seconds and it basically gives fans a glimpse at what they can expect to see in the next episode of Attack on Titan. The clip reveals that Connie is currently struggling to know the status of his family. However, he later starts believing that his family might have escaped with everyone before the Titans attacked, so he rides towards other towns to warn the about the threat. The Titans on the other hand, have already invaded a number of towns, but some of them are still in their previous state. Have a look at the preview clip of Attack on Titan season 2 episode 3 below and get yourself hyped up for it.

The preview trailer further reveals that while heading towards Ehrmich District, Eren and his team will discover how the Titans managed to breach Wall Rose and become a threat to mankind in an instance. The next episode will also hopefully reveal whether the Beast Titan has anything to do with this or not, and is Connie’s family safe or not. All will be revealed in the next episode of Attack on Titan.

Attack on Titan season 2 episode 3 is currently scheduled to air on April 15, 2017. Let us know if you’re excited for it or not in the comments below.