MobiPicker
News Asus Zenfone 2 Deluxe Special Edition with Whopping 256GB Storage Announced
Share on Facebook
Tweet on Twitter
Deal Alert: 49% Off on ExpressVPN
Touted as #1 VPN in the world, ExpressVPN is now offering 49% off & an additional 3-months of service on its annual plans.

After announcing the Asus Zenfone 2 Deluxe with 64GB / 128GB storage in India this month, the company has introduced a Special Edition of the phone in Brazil, with whopping 256GB of internal memory. The company unveiled the handset during an event held in Sao Paulo on Friday. The phone will be available in Brazil starting next month, however the pricing is yet to be revealed. 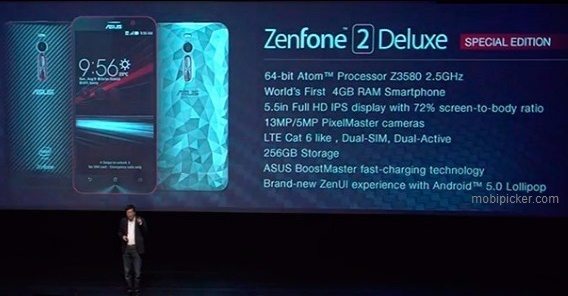 The phone supports Dual-SIM with Dual-Active, that means both the SIM cards will be active to receive the calls. Other connectivity features include 4G LTE Cat.6, 3G HSPA+, Wi-Fi a/b/g/n, Bluetooth, and GPS.