MobiPicker
News Asus Launch the Macbook-like ZenBook 3 and Transformer 3 Pro in India:...
Share on Facebook
Tweet on Twitter
Deal Alert: 49% Off on ExpressVPN
Touted as #1 VPN in the world, ExpressVPN is now offering 49% off & an additional 3-months of service on its annual plans.

Asus is really interested in making a mark in the India market. The Taiwan-based company, yesterday launched the ZenBook 3 and Transformer 3 Pro laptops, alongside the ZenFone 3 series of smartphones in an event in New Delhi. The two laptops are as pricey as MacBooks. The ZenBook 3 costs INR 147,990 and the Transformer Pro 3 INR 144,990. We can assure you the price is worth the exterior design and internal specs of the PCs.

The ZenBook 3 and Transformer 3 Pro were unveiled at Computex 2016 earlier in the year. Now, the two laptops are available in India. The ZenBook 3 is the caliber to compete with the ultrathin MacBook Air, in thickness and surpasses the MacBook Air in performance. Without further ado, let us look at the main specs of the two PCs Asus launched in India.

The Asus Transformer 3 Pro is a one of a kind 2-in-1 PC. The device is only 8.5mm thick. It has a stepless hinge that allows viewing of the display at angles of up to 170°. It comes with a backlit Asus Transformer Cover Keyboard. The 7th generation quad-core Intel Core i7-6500U clocked at 2.5GHz powers the 2-in-1. The device has 16GB LPDDR3 RAM and comes with 512 GB PCIe M.2 SSD. There is an option with 512GB SATA 3 M.2 SSD. For security and unlocking the device, Asus implemented a fingerprint sensor. 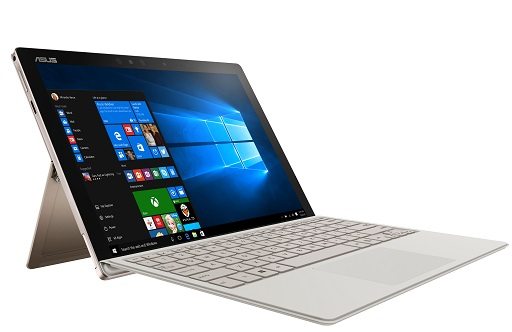 The Transformer 3 Pro features a 12.6-inch with 2880 × 1920 resolution and pixel density of 275ppi. For the ultimate entertainment experience, the device has Harman Kardon dual stereo speakers. This convertible is very rich in accessories. It comes with the Asus Pen stylus, which provides 1024 pressure points to guarantee accuracy and efficiency when sketching or drawing. On the connectivity front the device comes with HDMI, USB-C, USB-A 3.1, and Thunderbolt 3 ports.

The Transformer 3 Pro has a 13MP rear-facing camera and a 2MP front camera. The front camera supports Windows Hello facial recognition. The device weighs only 800 grams. The color options are Icicle Gold and Glacier Gray.

Now let us take a look at the ZenBook 3. It sports Intel’s Core i7-7500U chipset, a quad-core processor clocked at 2.7GHz and 4MB cache. The Ultrabook runs on 16GB LPDDR3 RAM and 1TB M.2 SSD (or M.3 SSD). You can increase the internal storage using the three empty PCIe slots. The laptop features the thinnest fan, only 3mm. On average usage, the battery lasts 9 hours. The device implements fast-charge technology that guarantees 60% charge in just 49 minutes.

The display is a Corning Gorilla Glass 12.5-inch Full HD with 72% NTSC color gamut. It features a quad-speaker from Harman Kardon. The keyboard is full-size and backlit. Using the laptop is made much more smooth by the glass covered touchpad, which also incorporates palm recognition software, handwriting support and smart gestures.

It has an aerospace grade aluminum alloy exterior and weighs 910 grams only. A downside to the ZenBook 3 is the fact that it has only one USB-C port. However, thanks to the ASUS Universal dock, users will have USB-C, USB 3.0 VGA, card reader, and HDMI ports. The Ultrabook is available in Royal Blue, Rose Gold and Quartz Red color options.

The two premium devices will be available in online retail stores soon, latest in October.

Which of the two devices do you prefer, the ZenBook 3 or the Transformer 3 Pro? Let us know via the comments section.