One of the most lucrative potential uses of self-replicating nano robots is mining. Not a regular mining but mining of asteroids filled with various metals and minerals, like the huge asteroid called 16 Psyche. Since there are millions of them orbiting in the asteroid belt between Mars and Jupiter, one day the asteroid belt could become the humanity’s main source of metals.  Of course, this won’t happen in the near future since the technology is still decades and decades away from becoming a reality. 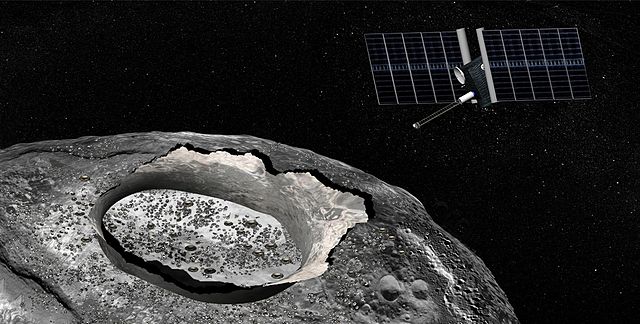 The mining is still just a dream, but NASA is getting ready to send a mission to the Psyche 16 in order to find out more about the forming of planets. You see, 16 Psyche is pretty mysterious. Scientists believe this 200-kilometre-wide object orbiting in the asteroid belt once was a planet that suffered so many hits which destroyed the outer layers of the body leaving just a bare core made out of materials similar to the ones believed to be found in Earth’s core.

The body is made out of different metals. Iron, nickel, as well as lots of other metals like gold, platinum, copper, cobalt, iridium and rhenium are the what’s left out of the 16 Psyche, making it a unique object in our solar system. No other comet or asteroid is made completely out of metal.

Lindy Elkins-Tanton, the lead scientist on the NASA mission and the director of Arizona State University’s School of Earth and Space Exploration, managed to calculate the worth of the asteroid, with the iron alone worth being around $10,000 quadrillion. A huge number, especially if we take into account the gross world product (GWP) in 2015, which was about $73.7 trillion.

Lindy Elkins-Tanton stated that the 16 Psyche is “such a strange object,” and that “Even we could grab a big metal piece and drag it back here … what would you do? Could you kind of sit on it and hide it and control the global resource — kind of like diamonds are controlled corporately — and protect your market? What if you decided you were going to bring it back and you were just going to solve the metal resource problems of humankind for all time? This is wild speculation obviously.”

Instead of bringing the object back on Earth (which is currently impossible), NASA is planning a mission to the 16 Psyche. The mission should launch in 2023, with the probe traveling for years before it reaches the asteroid in 2030. The mission will scan the object, and the data should give us details about how planets like ours are formed, and how they separate into different layers (core, mantle, and crust). The mission could also discover a real story about 16 Psyche’s formation.

Elkins-Tanton said that “Short of it being the Death Star … one other possibility is that its material that formed very near the (sun) early in the solar system,” and that “I figure we’re either going to go see something that’s really improbable and unique, or something that is completely astonishing.”

A new study suggests the asteroid could even contain water, and “That water can be used to make rocket fuel or be drunk by people, so then we’d have a resource stop that has metal and water.”

The mission is still years away, but if successful, it could completely change our current planet-forming theories.