Google has connected a new 26Tbps undersea cable from U.S west coast to Taipei, Asia. Taipei is the company’s largest data center in Asia. This means the Asian users will now get faster Google services. 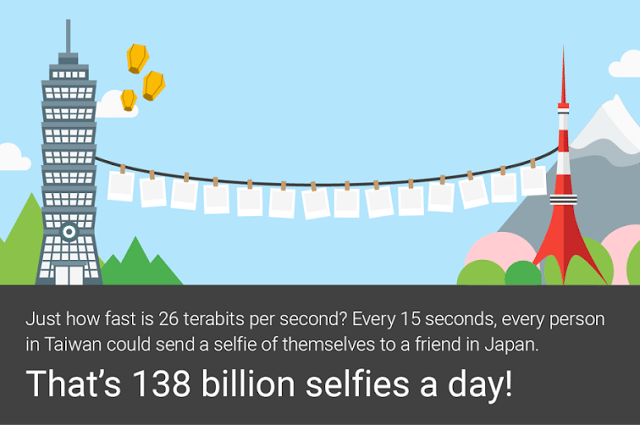 The new step has been made to keep up with increasing user base in the Asian region. Google’s switch to a high-speed undersea cable will bring faster services to India too. The new cable now extends from Oregon in West Coast U.S to Taipei.

The huge initiative was started in 2014 as a collaboration between multiple companies including Google, China Telecom Global, China Mobile International, Global Transit, KDDI and Singtel. All these companies pitched in for the 9000km transpacific cable system from the U.S west coast to Japan. The cable was opened up a few months ago. Now, it that the same cable will be extended to Taiwan.

Back in June, the six-member FASTER Consortium began beaming light through the FASTER cable, the world’s fastest fiber optic undersea cable to date, which connects the United States and Japan. We wanted to spread this lightning fast connectivity a little bit farther, though.

So, to extend the benefits of this Trans-Pacific link to the rest of Asia, we invested in a cable that links FASTER in Japan on to Taiwan, where our largest data center in Asia provides millions of people across Asia with quick access to our tools and services, at speeds of up to 26 terabits per second.

You may not notice right away, but this new cable should help Google products and services load more quickly across the region. It should also improve the reliability and consistency of this speedier experience, since the cable was strategically built outside of tsunami zones to help prevent network outages related to natural disasters.

With more people coming online every day in Asia than anywhere else in the world, we’ve been working hard to invest in the infrastructure needed to make the Internet work for all of us who live in the region. That’s why we’ve built two data centers in the region and have already expanded our facility in Singapore. It’s also why we’re investing in these undersea cables – to make everyone’s computing just a bit faster and to bring people around the world just a bit closer together.