MobiPicker
Android Applications Apple Music 0.9.5 APK Download Now Available For Android Phones
Share on Facebook
Tweet on Twitter
Deal Alert: 49% Off on ExpressVPN
Touted as #1 VPN in the world, ExpressVPN is now offering 49% off & an additional 3-months of service on its annual plans.

Apple Music is Apple’s own music streaming service and has witnessed huge success after its launch. The service is being provided on Android phones too using the Apple Music app for Android. If you are a music lover, then you can try out Apple Music’s 3-month free trial and can listen to over 30 million songs!

The Apple Music Android app provides you with smart recommendations on the basis of what you listen to and what you love. All the latest music along with radio shows are offered on the app. You can create your own Apple Music playlists, and you can keep all your iTunes purchases and music in one place. The app is going to get new features soon, but before that, some small, regular updates are mandatory. 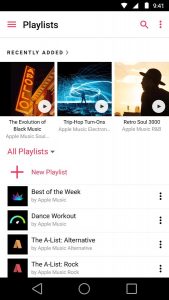 One such update has been outed by Apple today, and the new Apple Music 0.9.5 APK has been released officially. The update weighs 30.23 MB and runs only on Android 4.3 and above. It brings just a few changes. You can keep more music offline now, thanks to the new option that allows you to download songs to an SD card. You also get to see the full schedule of Beats 1 shows. The option to Browse My Music by Composers and Compilations helps you find your favourite music more easily.