Apple is known for producing quality products, one being the beloved Apple iPhone. But how exactly will you test the quality of the iPhone? A drop test? A hammer test? Nope. A bullet test. Surprised? 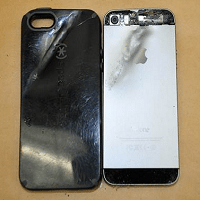 An incident in Fresno has proved that Apple does put in a lot of effort in the quality of its iPhone. Last Monday, a student of the California State University in Fresno was on his way back to his apartment at 11pm, when he was confronted by a mugger who pointed a gun at the student while trying to snatch his computer bag. In the struggle, the gun went off. In a chaotic moment, the mugger fled the scene. However, the 24-year old student was totally safe, as the bullet had actually bounced off of his iPhone!

The student wishes to remain anonymous, but his roommate told the local press that the victim was indeed very shaken by the incident. He said that the victim’s jeans had a tear and his iPhone had clear signs of the bullet. Meanwhile, the victim has left school and might not return.

It is understandable that the event was extremely disturbing and scary for him. The student indeed was lucky to be an iPhone owner, and kudos to Apple for manufacturing such a robust product that is way stronger than it initially looks!