The larger screens have been a looked-for feature in Apple phones previously to them which was only available in Android based devices. Not only the Apple iPhones are getting bigger in screen size they are also getting slimmer by the body, faster with A8 processors and have improved snappers with iSight.

According to a survey by RBC Capital Markets the upcoming iPhone 6s may beat all the previous records of sales done by iPhone 6 and 6 Plus and will definitely join the party bandwagon. The survey has predicted a positive y-o-y growth, which has been made possible by integrating the carrier contracts with customer’s upgrade cycle and the launch cycle.

[quote_box_center]”While there has been concern regarding AAPL going ex-growth in Dec-Qtr, our survey work shows carrier contracts are the bigger driver for refresh cycles, implying 6s cycle should be positive given contract renewals and sustained expansion of 4G networking in China. We are raising our estimates ahead of Street expectations for June, FY15/FY16 but maintaining our OP rating and $150 target.”[/quote_box_center]

This has been on the basis of the 6000 respondents who have been surveyed about their decision to purchase a smartphone. From the results it has been inferred that the Apple customers are loyalist to their favorite smartphone brand. Basis the results Apple should now seek to increase the adoption of its iOS devices to continue seeing its revenue graphs moving upwards. But there is an area of concern also highlighted in the form of iPad whose demand has not been increasing and has attained a plateau now which may further disappoint in the quarter ending today. 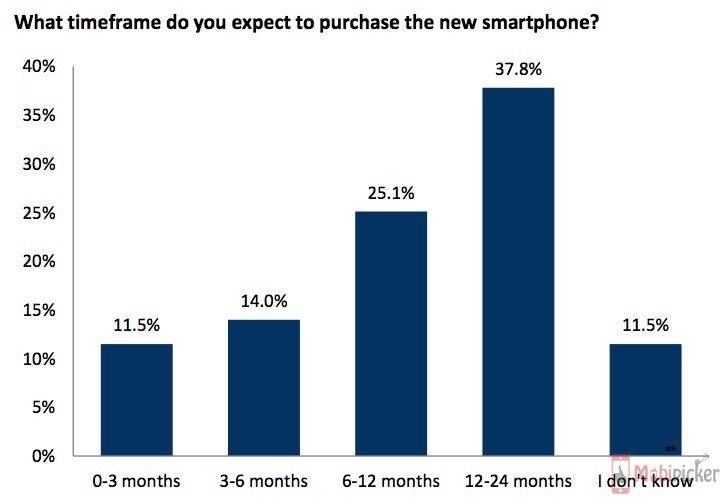 Out of the current iPhone users surveyed, 83.4% showed their loyalty to Apple while only a far less i.e. 64.2% showed their closeness to Samsung. Also it has been inferred that 50% of users who are intending to buy a new Apple iPhone will do in coming 12 months where the only ask from the customers is a long battery to juice up your iPhone.

The upcoming iPhones from Apple will most likely to sustain the screen sizes of 4.7 and 5.5inches. According to the rumors, the upcoming phones touted to be iPhone 6S and 6S Plus may feature A9 processor with 2GB of RAM, Force Touch, 12MP camera, improved Touch recognition and many more; not to forget the new color variation of Rose Gold.