Apple ‘Hello Again’ event is being held on October 27, where the tech giant is expected to launch its MacBook lineup. It will be held at the company’s campus in Cupertino, California. 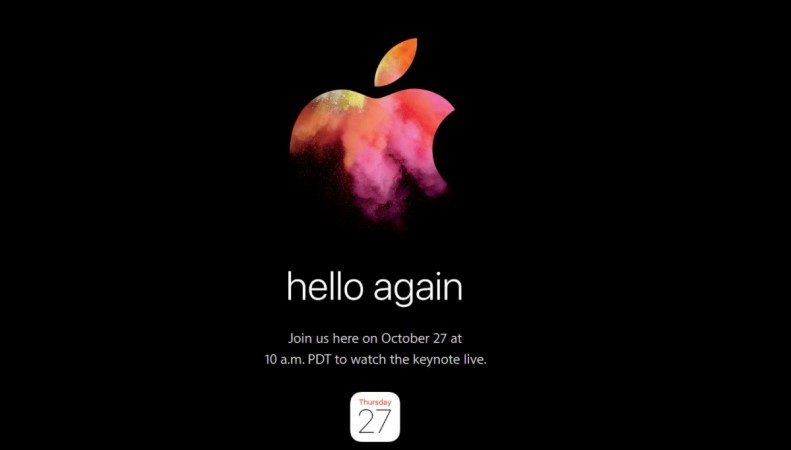 After the iPhone 7 launch, the ‘Hello Again’ event is highly anticipated among Apple fans. The Cupertino-based firm has already sent out media invites, which read ‘hello again.’ The keynote will begin at 10 am PDT (10:30 pm IST). It will be live streamed. You can catch the entire event on Apple devices and latest Windows 10 PCs with Edge browser.

So far, Apple has been holding its cards close to the chest. However, the company is expected to finally upgrade its PC and laptop series. As per KGI analyst Ming-Chi Kuo, the Thursday event will be focused on the Apple’s Mac lineup. We might see multiple announcements in the series. Apple is likely to launch a redesigned MacBook Pro 2016 with 13-inch and 15-inch displays.

Additionally, Apple might also introduce a 13-inch MacBook with several upgrades. However, the MacBook Air and iMac lineup are unlikely to see new upgrades.

The new MacBook Pro 2016 is expected to come with many new features and improvements. The new additions will include an OLED function key panel on the upper part of the keyboard. The contextual touchpad will offer different controls, allowing you to perform different functions, depending on which app or program is active on the screen. The Apple’s official name for the new feature will be the ‘Magic Toolbar.’

The MacBook Pro 2016 is reported to come with a 5K display, Touch ID power button, USB Type-C and Thunderbolt 3 ports in a thinner design. It is expected to be powered by the sixth generation of dual-core Intel Core M processors. Apple may also use the seventh generation Intel Core i5 and Core i7 CPUs.