Since the day Android Pay was launched, a lot of time has passed and it is now time to fix the issues in it with an update. Yes, Google has rolled out the version 1.1 of Android Pay, and though there are no major additions in the update, a lot of bugs have surely been dealt with. If you are a regular user of this app, then you might as well get this update right now.

The most essential bug fix in the update is for those users who installed Android Pay on more than one devices. In that particular issue, the loyalty and membership cards of the users won’t show up until they add a credit card on that device. This error is fixed in Android Pay v1.1, and all your non-payment cards should now be visible in all your signed-in devices. For obvious security reasons, payment cards need to be manually added to each device. 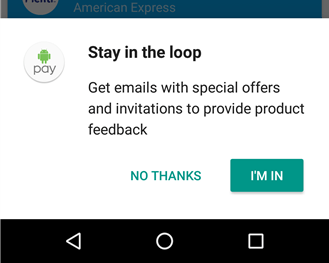 Talking about visual changes, there aren’t many of them, but the most noticeable one is in the menu. Send feedback and See participating banks are the two new options added to the menu in Android Pay. You will also come across a pop-up saying Stay in the loop, which is a opt-on prompt just in case you want to receive surveys and promotional content via email. No more major changes are seen in the v1.1 update other than some text modifications.