Everyone has been wondering about the long-awaited Marshmallow update for their devices, and now thanks to a leaked road-map, the Samsung Galaxy users can check out the update schedule for their smartphones. This timetable of Marshmallow update is divided into two phases – Phase 1 and Phase 2.

For those who are not aware, the key features of Android 6.0 Marshmallow update includes such as Google on Tap, which offers contextual search results based on the things shown on your screen. Then, Doze cuts down background running apps when your phone is idle and therefore increasing standby time. Another nice feature of the update is control on app permissions – One can manage apps permissions on individual basis instead of approving all the permissions at once. You can check out more details on Android 6.0 Marshmallow update here. 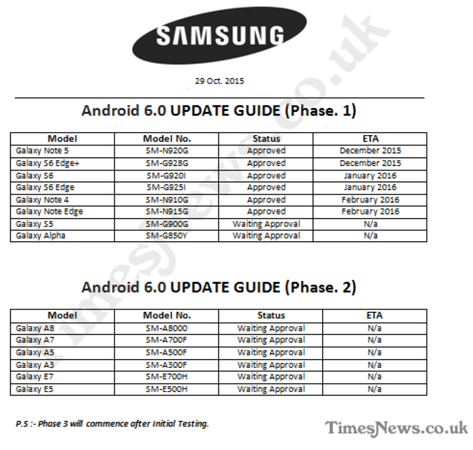 We will keep you updated about the devices awaiting technical approval and about their scheduled Marshmallow updates. Stay tuned.