On July 15 Evan Blass more popularly known by his twitter handle @evleaks, revealed specs of Huawei Nexus. It is to be noted that any such disclosure made by @evleaks has turned to be correct and true. But in a trending reports coming from Chinese analyst Pan Jiutang on Weibo has refuted the disclosure made by Evan wherein it was claimed that Huawei Nexus will be powered by Snapdragon 820. 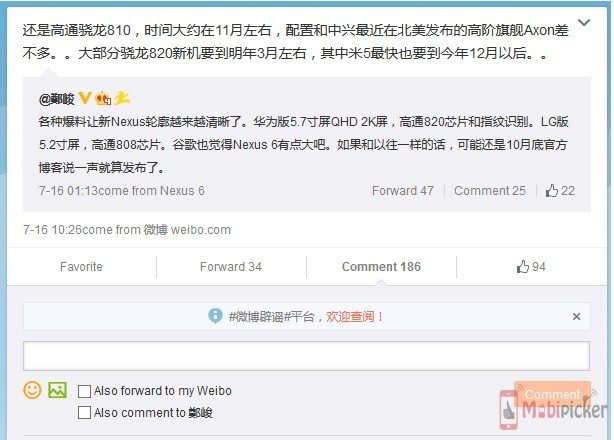 According to Pan Jiutang, devices which were expected to be powered by a Snapdragon 820 chip will be not get released before March 2016 whereas Snapdragon 820 will be released in December. Also he reinforces that the rumored Xiaomi Mi 5 Plus will be the first device to house a Snapdragon 820.

But one thing is sure that the Nexus will come with QHD (2K display) as confirmed by both the sources. Now it’s your turn to believe in what  you like and have to wait little more to get this haze cleared out.