American Ninja Warrior Season 9 is set to premiere soon on TV screens. This reality show features talented contestants who tackle physical obstacles to win a grand prize and a title.

Every year hundreds of contestants take part in the show to display their physical strength. Now, as the premiere date draws closer, check out American Ninja Warrior Season 9 schedule here.

Before the main reality show kick starts, fans witnessed last week the Celebrity Ninja Warrior episode. In this past ninjas were seen coaching the celebrities. Such as Arrow star, Stephen Amell.

Talking about his experience in the show he says, “Ninja Warrior was great,” but he was scared after the second obstacle, reported Comicbook.com. The report adds that the celebrity thought he tore his biceps off the bone.

USA Vs The World Episode

Before the premiere of the main competition in June, fans of the show will get to watch an exciting episode on June 4. This episode is called “USA vs The World.” In this, teams of the very best Ninjas from three different parts of the world compete on the National Finals stages in Las Vegas, reported American Ninja Warrior Nation.

The new season of American Ninja Warrior show will have new developments included. Such as the according to the official website, this season, the show will make stops in Los Angeles, San Antonio, Daytona Beach. Along with this, it will also make stops at Kansas City, Cleveland, and Denver, before heading to Las Vegas for the national finals. 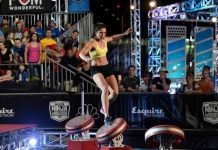