American Ninja Warrior Season 9 is set to premiere on June 12 at 8 PM on NBC network. The reality show which is popular for its thrilling stunts performed by the various athletes is returning soon with new developments. Read to know more.

The previous season of this reality show has seen 28 new obstacles. There has been a good amount of women registration seen in Season 8 of American Ninja Warrior. In that season, Jessie Graff became the first woman to complete the Stage 1 of the show.

Contestants Drew Drechsel and Daniel Gil made it to the Stage 3 but failed to complete it in Season 8. The Season 7 has seen athlete Isaac Caldiero completed the Stage 4 rope climb in a faster time and was awarded the grand prize!

According to the new preview of the Season 9, host of the show are seen talking about more number of women participants. Perhaps, more women are taking inspiration from Jessie Graff. She recently made another record of becoming first ever woman to complete Stage 2. She was part of Team USA in the USA v/s World contest that took place on June 4.

What Happened In USA v/s The World?

The USA v/s World competition showcased the amazing talent from Team USA, Team Europe, and Team Latin America. Jessie Graff from Team USA once again gave an outstanding performance and completed the Stage 2. She once again made a history and the crowd cheered for her on completion of her task. At the end of the contest, Team USA emerged victoriously and beat Team Europe in the tiebreaker. 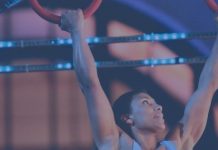 ‘American Ninja Warrior’ Season 9 Schedule: Everything To Know Before The Premiere