AMD’s recently unveiled Radeon Pro Duo graphics are in the news for all the good reasons. The card – combining two of AMD’s fastest GPUs – is taking on Nvidia’s recently released Titan XP and Quadro GPUs. It is endowing a beast of a package at a price far low than others. But, even with those spectacular capabilities, there’s something about Pro Duo that doesn’t seem to fit into the equation.

Precisely speaking, it is the performance of this graphic card. Radeon Pro Duo is slower than its 2016 processor – something that none of us would have expected from AMD, especially considering it’s growing domination in the GPU segment. This card, based on the first version of Polaris code-named Ellesmere, delivers 11.45 teraflops of single precision performance. It looks pretty decent till here, but when we take it up against the 16 teraflops offered by last year’s Pro Duo, based on the Fiji architecture, it is surely a big downgrade.

Why Cut Performance On Pro Duo?

While performance levels are expected to grow up with each new generation, AMD, in our opinion, chose to cut performance in a bid to reduce heating. The new processor features fewer processing cores and draws just 250 watts of power, instead of 350 watts taken up by its predecessor.

But, that’s not the only thing changing here. The new Radeon Pro Duo also costs $500 less than its predecessor. It has been priced at a decent $999 and will start hitting the shelves by the end of May. Clearly, AMD has worked on its strategy against Nvidia. The company is now focusing on slashing its competitor’s market share by offering consumers high-performing cards at modest prices.

No Response From AMD 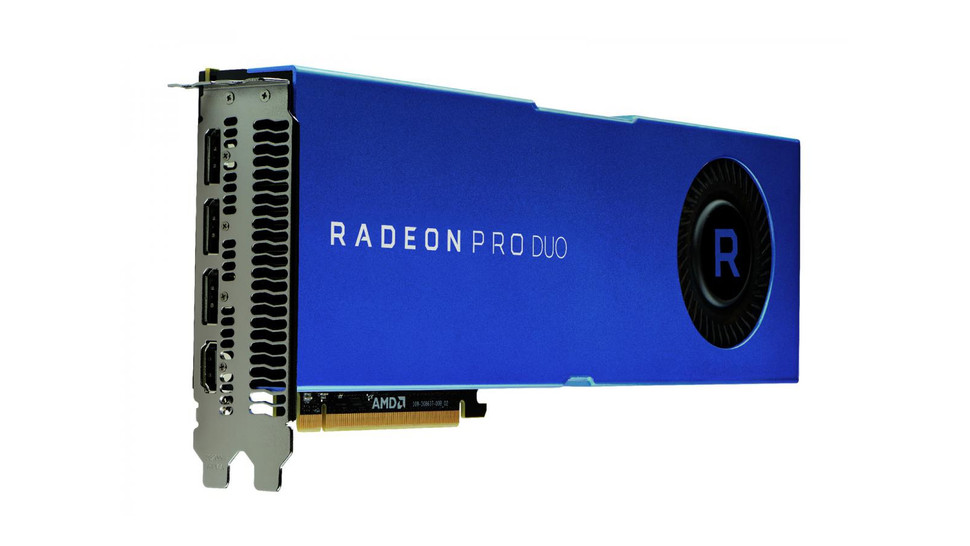 The popular tech-giant has been tight-lipped about Pro Duo’s reduced performance. The graphic card is targeted at creative professionals, many of whom might need improved performance from the new GPUs. However, from what see, it seems like AMD is positioning the new GPU as a faster version of its single-GPU Radeon Pro WX 7100. Pro Duo has two WX 7100 graphics chips, which makes it two times faster.

Either way, Radeon Pro Duo still has a lot on offer. The graphic card ropes in support for 8k and 4k content, which could prove extremely useful for creative professionals. Plus, it can also be used to create VR content.

AMD has its own LiquidVR technologies, which can be deployed to create VR content compatible with its GPUs. For instance, used with LiquidVR, some of the new AMD GPUs based on Polaris can reduce the resolution of images in a VR headset screen when a user isn’t looking at them.