MobiPicker
Tech Hardware AMD Ryzen Reviews In Progress, Pictures Surface Online
Share on Facebook
Tweet on Twitter
Deal Alert: 49% Off on ExpressVPN
Touted as #1 VPN in the world, ExpressVPN is now offering 49% off & an additional 3-months of service on its annual plans.

It seems the first batch of AMD Ryzen samples have already made its way to reviewers, and as you would expect, the chipsets are being put through some rather demanding tests for the purpose of assessing their performance under harsh conditions.

According to reports, some reviewers have even begun testing the samples under extreme cooling. The first report came from the folks over at HWBattle who managed to lay their hands over a brand spanking new AMD Ryzen processor along with an X370 chipset-powered AM4 socket motherboard.

The model tested by HWBattle is currently unknown, but it looks like they also received their sample in the same box package that AMD has been sending out to reviewers ever the Bulldozer days. The test was conducted using a Biostar Racing X370 GT7 motherboard. (For the uninitiated, the X370 GT7 has made itself quite a reputation among its peers sporting the AM4 socket.)

The second picture released by the HWBattle team displays the rig used in the test in operation mode. Look closely and you will see the Windows logo as the machine boots up. Look even closer and you will spot that the CPU is operating under LN2 cooling. The multimeter in the pic confirms a temperature of -29C.

In its report, the website has stated that the sample came with Cold Bug fixed.

While AMD is yet to show off any live demonstration of overclocked Ryzen CPUs, some overclocker enthusiasts previously pointed out that AMD chips suffered from multiple cold bug issues in the past. The new reviews of the sample chips will hopefully help establish whether or not those issues have been resolved in the Ryzen lineup.

HWBattle didn’t publish any score, clock, or performance that was achieved during the tests. So far we can tell, this was mostly a test run of the chip under LN2 cooling, meaning odds are high we will have some specific numbers in the coming days. 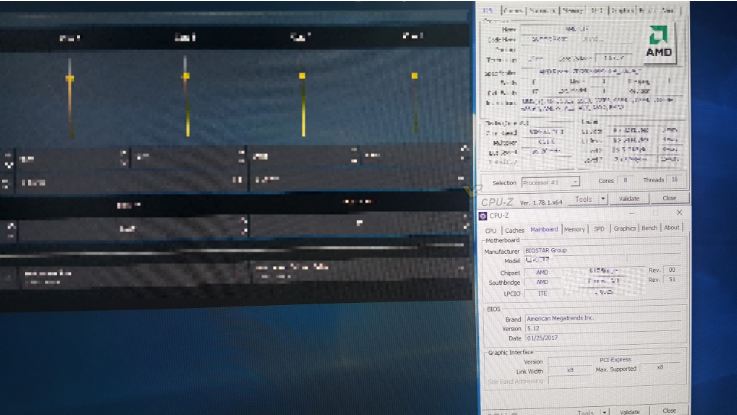 You can see in the image the overclocking utility enables users to control clock speeds for individual cores. Also, there appear to be loads of other features that let users have better control overclocked cores.