The upcoming AMD Ryzen desktop processor was announced during the recent New Horizon event, where AMD showed the info regarding the new processor. The RyZen is based on the new Zen architecture and should bring much better performance compared to current AMD processors, both for regular users and hardcore gamers. 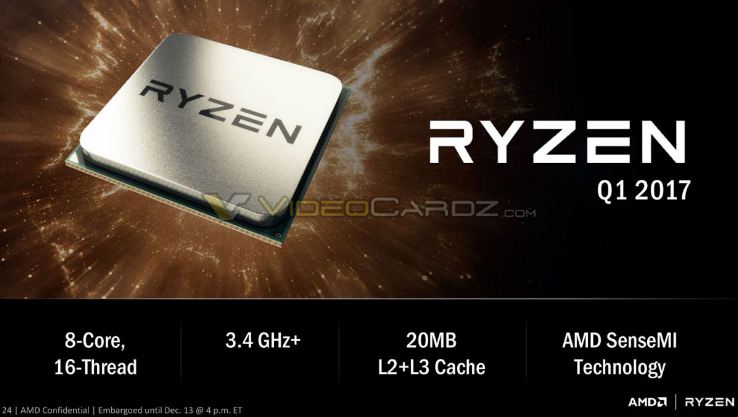 At the moment, the current FX processor line isn’t powerful enough to compete with fastest Intel’s processors, even the strongest FX-8150 can come near to the i7 CPUs. The situation is pretty grim for AMD since the company can’t be a worthy competition to Intel.

This could soon change with the release of RyZen since AMD could go back to the company’s glory days of Athlon 64.

Lisa Su, AMD CEO, talked about the RyZen; she was excited, stating that the upcoming processor is able to compete with Intel’s strongest desktop processors.

Lisa stated that “[W]e believe that there has been no innovation in desktops over at least the last five years,” which is true. AMD couldn’t make a CPU strong enough to endanger Intel, and Intel didn’t have a motivation to come with large innovations since AMD wasn’t a strong competition. This could change, starting with Q1 2017.

“The ‘Zen’ core at the heart of our Ryzen processors is the result of focused execution and thousands of engineering hours designing and delivering a next-level experience for high-end PC and workstation users,” stated Su. She also stated that “Ryzen processors with SenseMI technology represent the bold and determined spirit of innovation that drives everything we do at AMD.”

AMD claims the RyZen will be able to compete with the Intel Core i7-6900K; the demo showed at the event, revealed the RyZen packs 8 cores (16 threads) clocked at 3.4 GHz. Pricing was not mentioned, but since AMD’s strategy is to offer products that are more affordable than the competition (Intel) we can expect for the company to offer the RyZen at the lower price than Intel sells Core i7 CPUs.

The new processor from AMD should provide massive performance boost both for the normal users and gamers. The RyZen is able to run a video game and at the same time enables Twitch or Beam streaming.

This could be huge since many professional gamers use two computers when streaming; one for playing the game and the other for streaming and encoding. If the RyZen is really capable of running games and streaming at the same time, they could do all the work on just one machine. The Core i7-6690 was shown running games and streaming, and the CPU wasn’t capable of providing enough power for both tasks. Streams showed the game was dropping frames while being streamed on Twitch TV.

Regarding Vega, not much was shown. The machine, composed out of RyZen and Vega-based graphics solution was able to run the Star Wars: Battlefront in 4K resolution, a solid feat by itself. AMD, however, didn’t share anything regarding the release date of Vega.